Udder Prep and Milking Routine for My Dexters

Last fall I posted my udder prep and milking routine.  Then in February of this year as I was drying off Siobhan, she ended up with Staph A mastitis in one quarter.  My vet felt that her self-sucking on that quarter probably caused it, but he recommended that I change my milking routine to include use of an iodine pre- and post-dip.  I followed his advice.

The more I read and asked questions, especially on Keeping a Family Cow forum, the more I became convinced of several things:

Using this udder prep and milking routine since early this year, we have 100% clean milk tests--two on Siobhan and one on Ebony.  Since we had to travel a lot this summer, once the calves could handle all the milk this spring, I let both the cows just be mothers with only occasional milking.  Now it's time to wean Ebony's calf, Tiggy, so I'm milking Ebby OAD (once a day) in order to monitor her before I dry her off.  Here, then, is our routine . . . 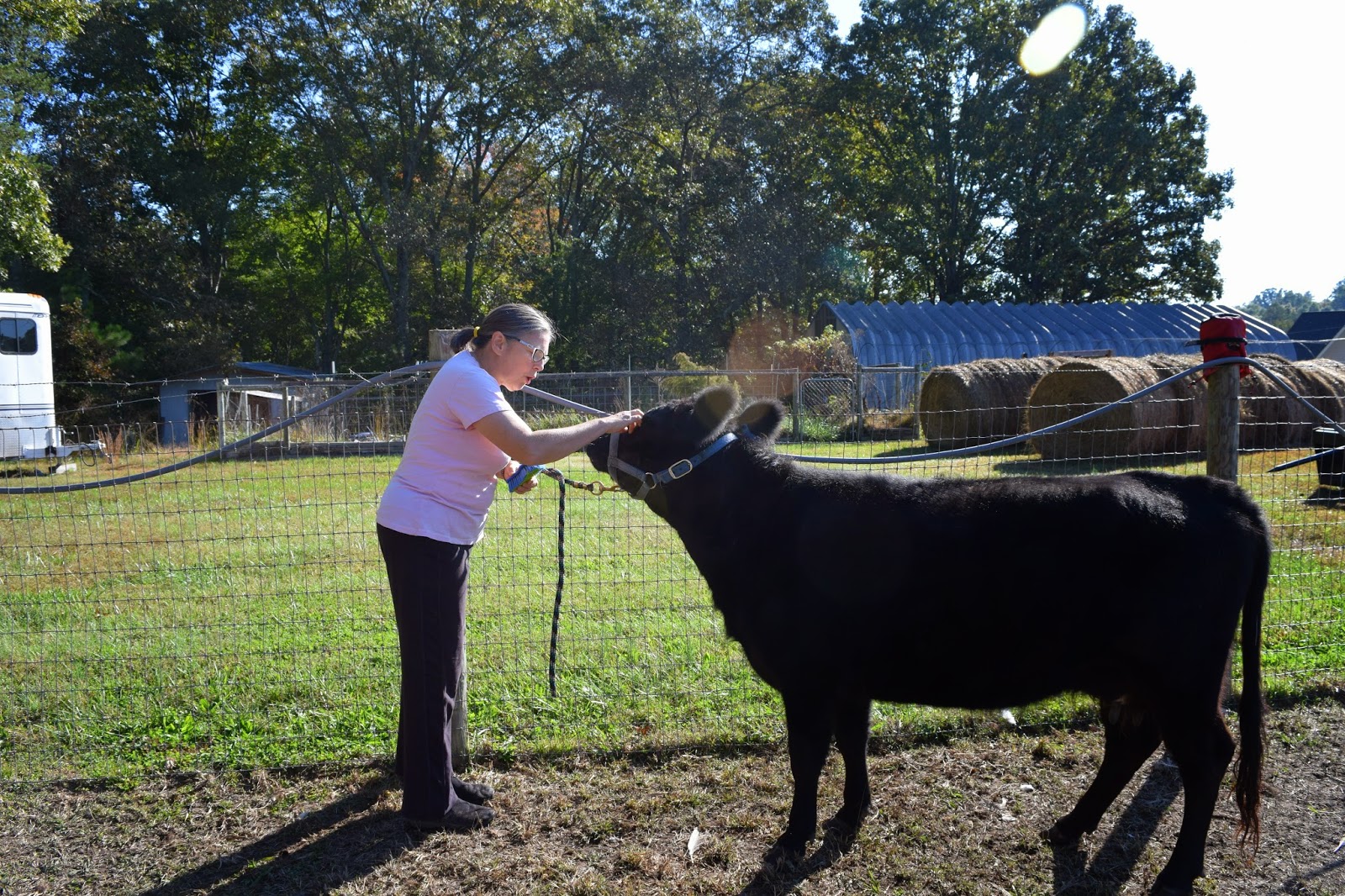 Bring the cow to the milking parlor and tie her outside.  This gives her a chance to poop and pee before she gets into the stanchion. Now is a good time to brush the cow.  This is a bonding time and establishes a routine that prepares her to let down.

Most importantly, check her udder and clean off any hay, mud, manure, etc.  (Ebby is normally a clean cow and doesn't usually lay in her manure, but like many Dexters she does have a hairy udder, so cleaning removes anything that could fall into the milk.)  In the milking parlor I keep a gallon plastic ziplock bag full of sanitized cloths, and I grab one to thoroughly wipe off her udder. 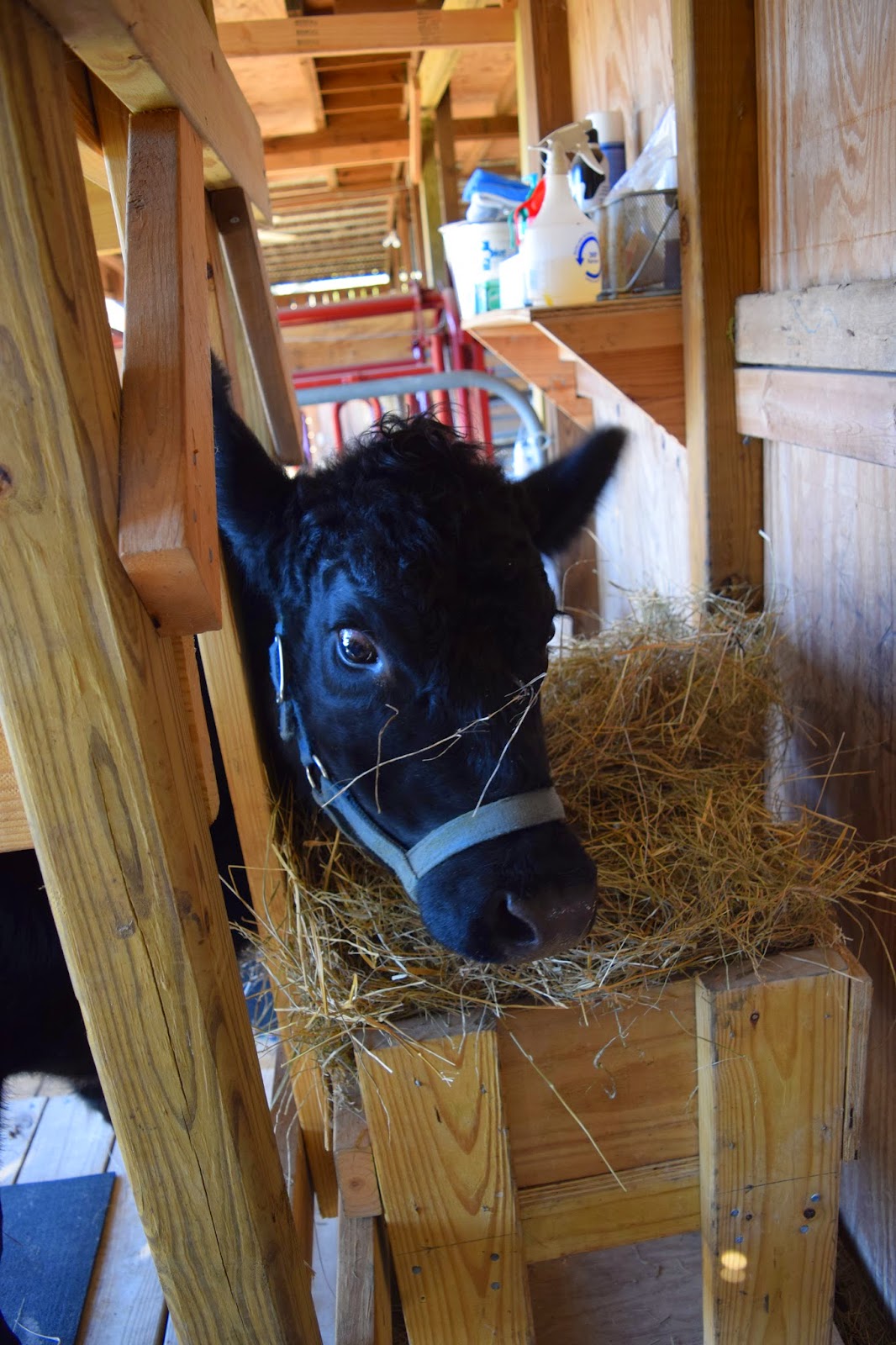 Let the cow into the stanchion (lead her or let her walk in) and close the neck catch.

(Ebby was upset at being separated from Tiggy for 15 hours, her udder was quite full, and Tiggy was bawling her head off nearby (but out of sight) in the round pen.  So this was not Ebby's happiest time in the stanchion, but it was when I had a photographer available so we went for it.)

Thanks to Kara for the great photos! 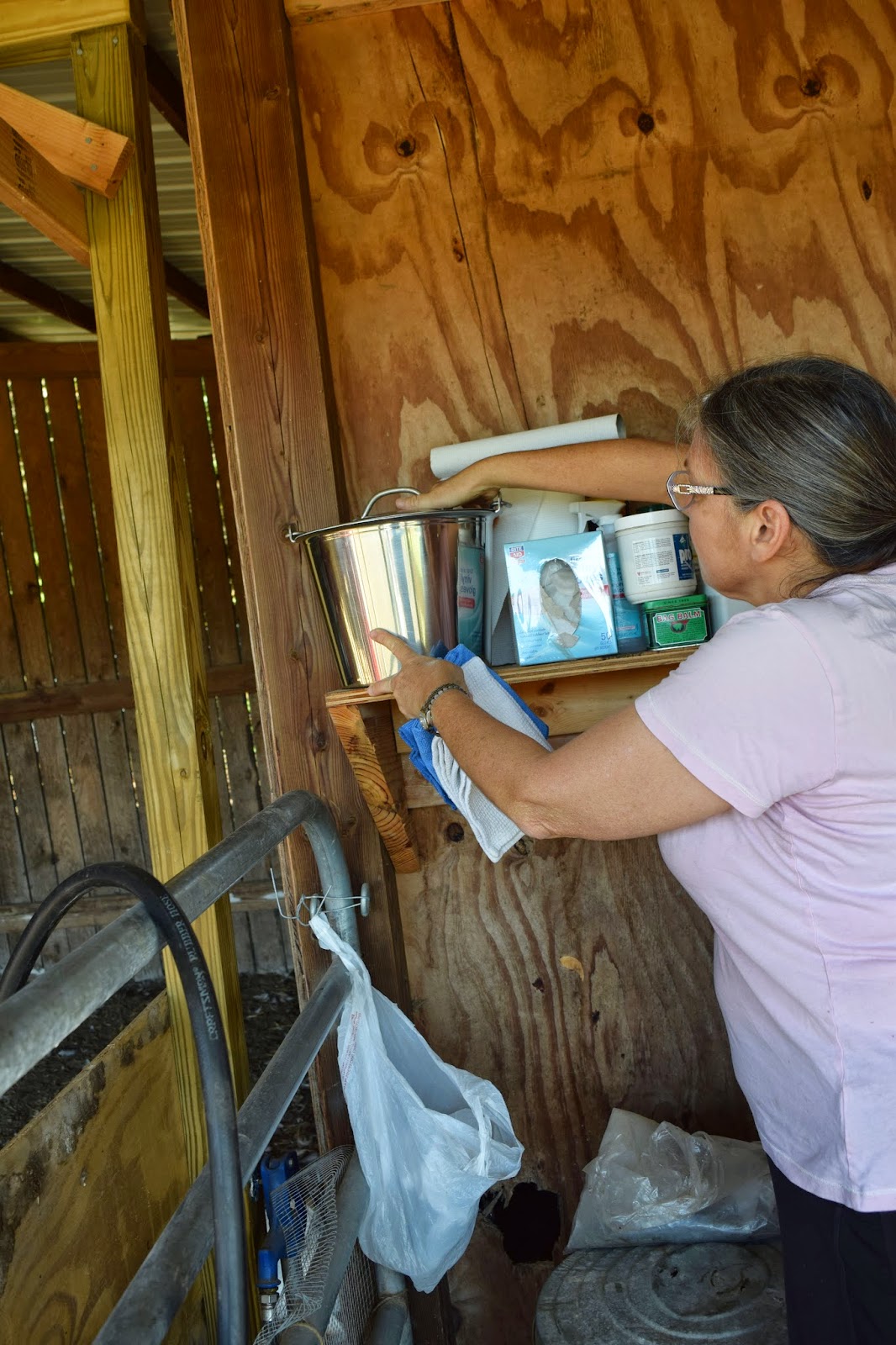 I use a shelf because it's out of the reach of pee and poop splatters and can't get knocked over by accident. 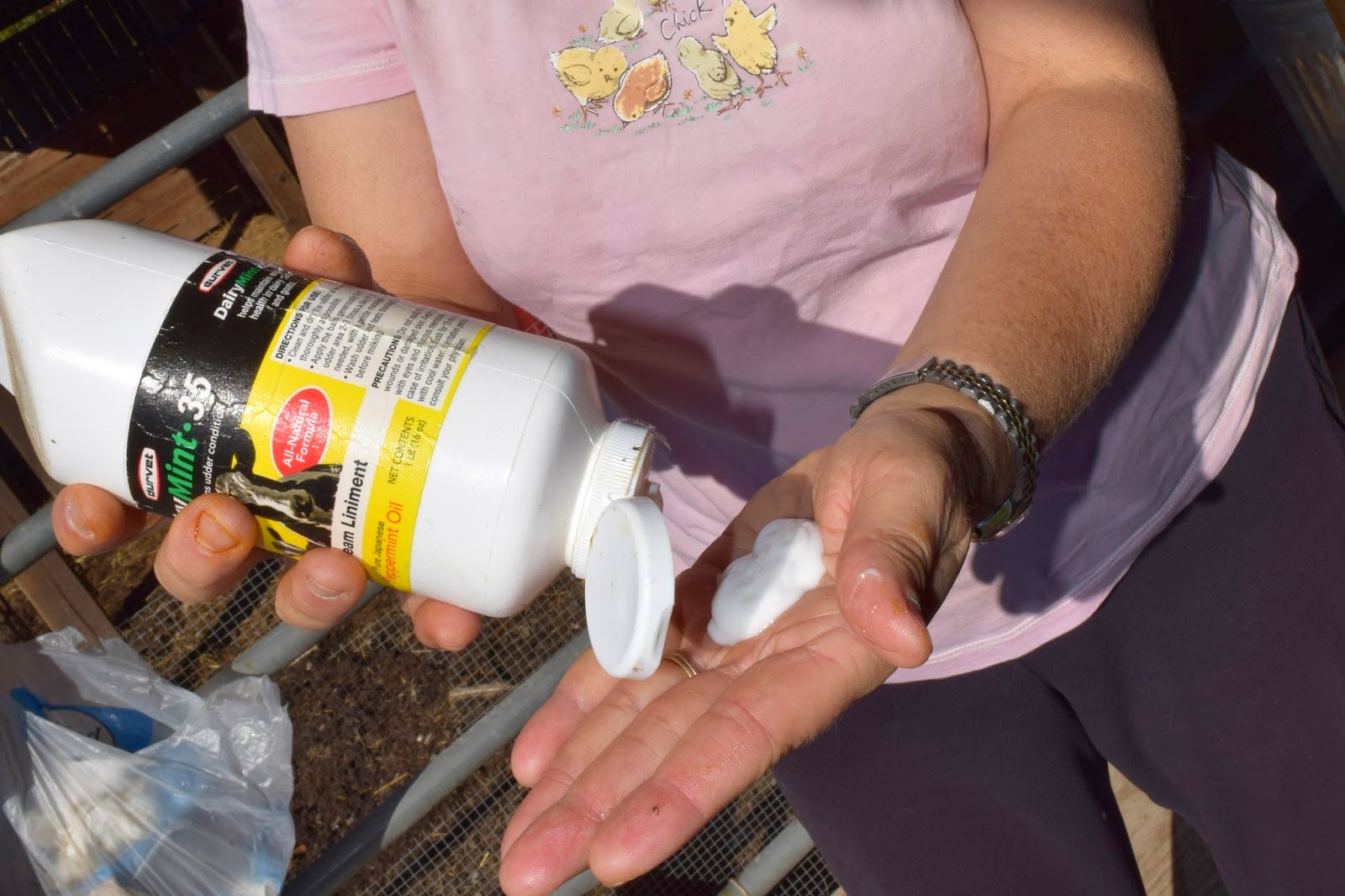 Optional:  Apply mint udder balm if needed.  I used this for Ebby because she was so full and uncomfortable.  It's also great for newly-freshened cows with edema.   Massage the mint balm into the udder, but keep it off the teats because some cows don't like the sensation on the bare teat. 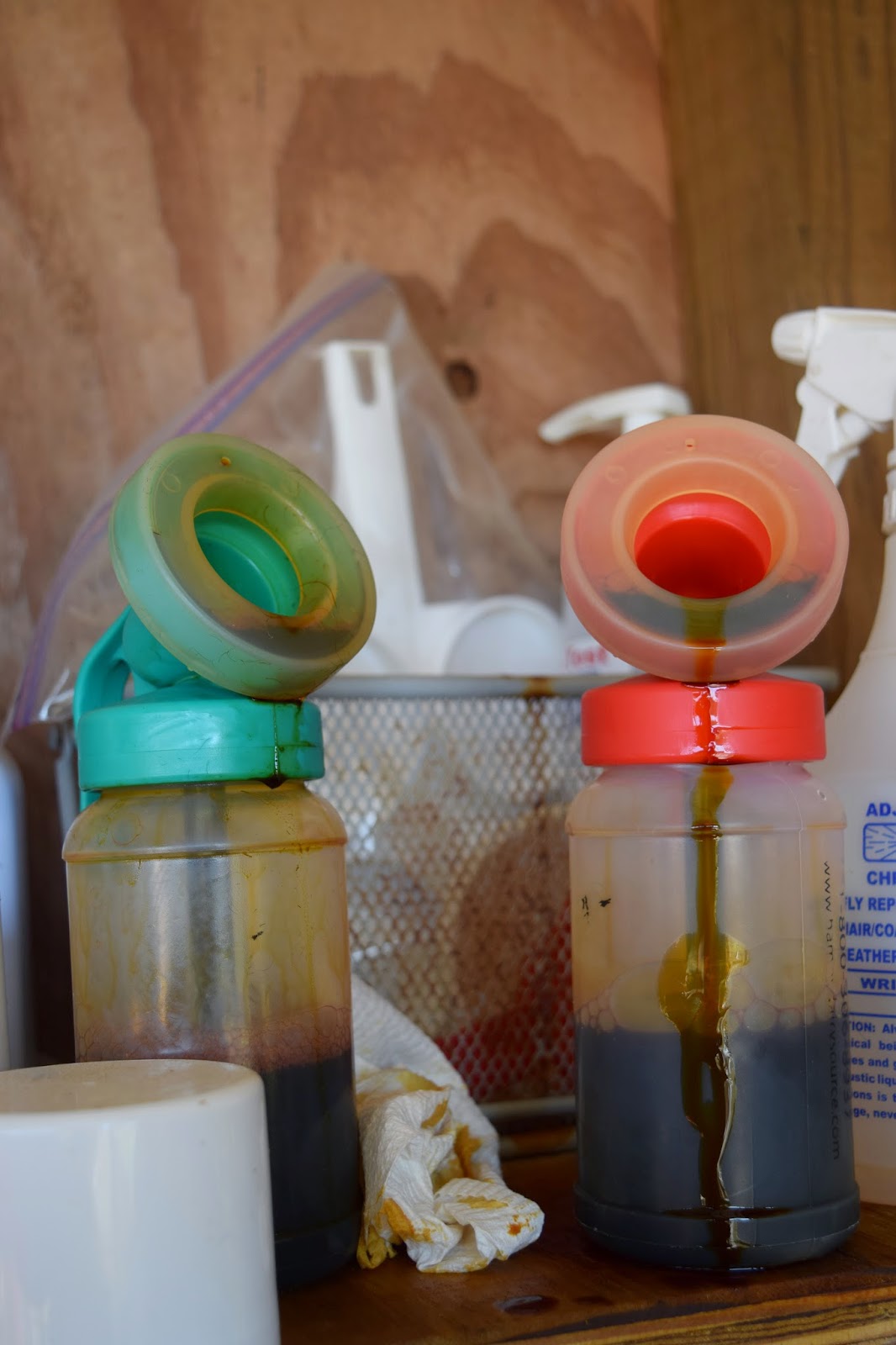 Have the iodine teat dip (this is Teat-Kote 10/III from Hamby Dairy Supply) in separate cups for pre- and post-dip.

(I bought this style because they fit easily under short cattle, but I don't like how they drip.  I would like to replace them with these, but they don't come in multiple colors.  So I guess I'll put up with the drips!) 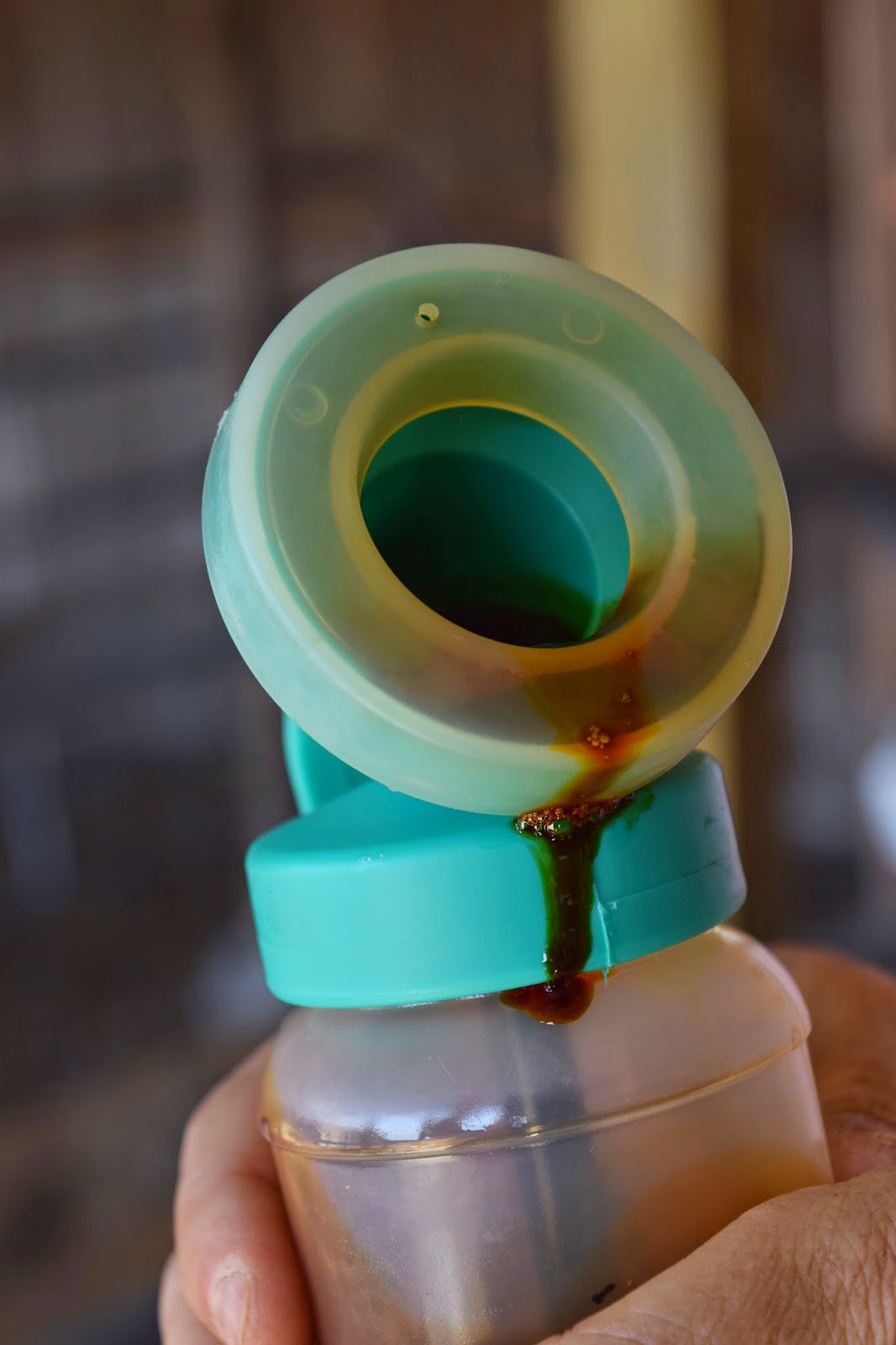 Take the GREEN cup for GO, and squeeze some into the reservoir. 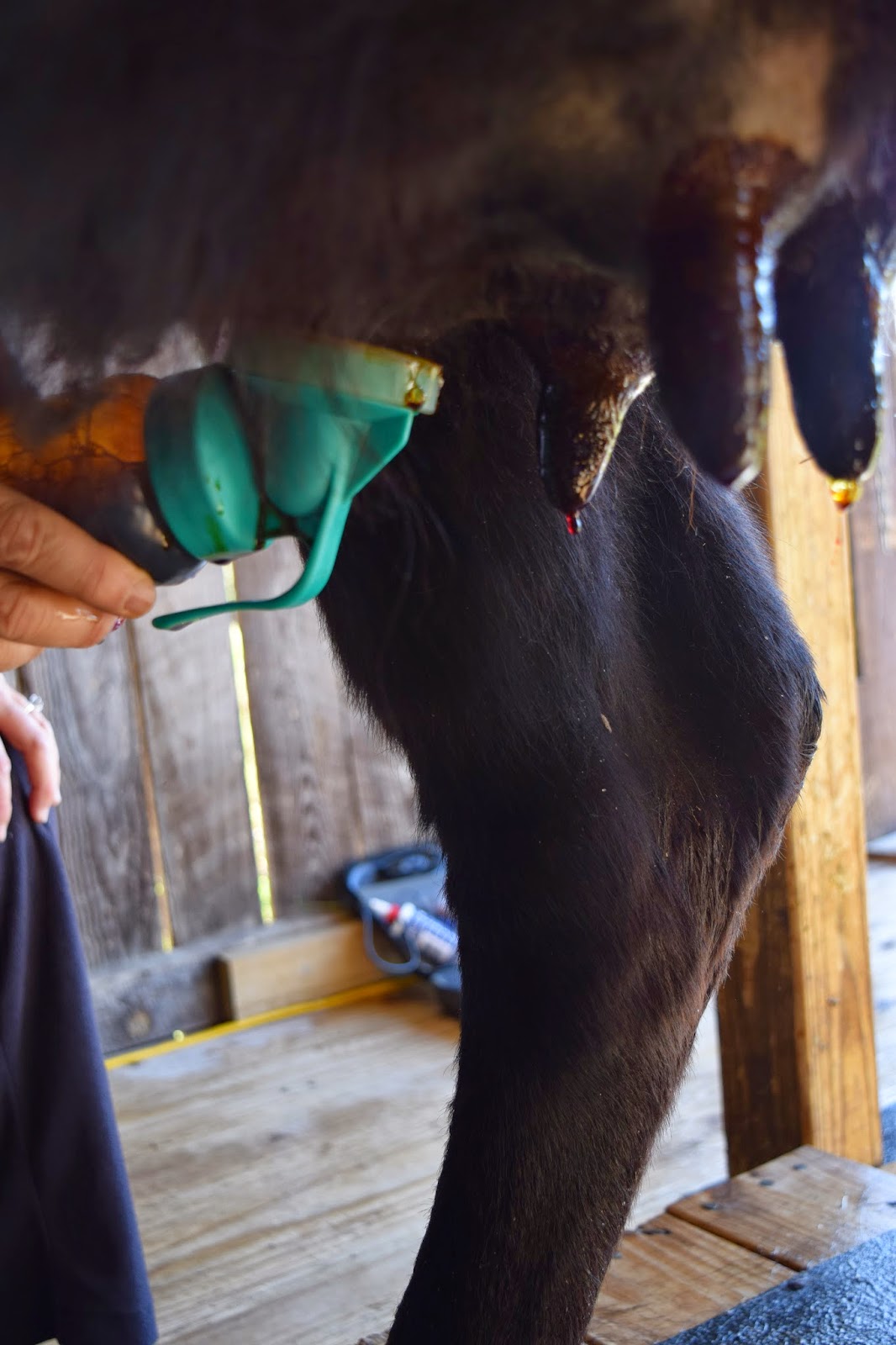 Dip each teat by pushing the cup up until the dip completely surrounds the teat.

When the last teat is dipped, you can dump the extra dip on one of the cow's hooves.  This can eliminate any possibly contaminated dip and is good for the hooves. 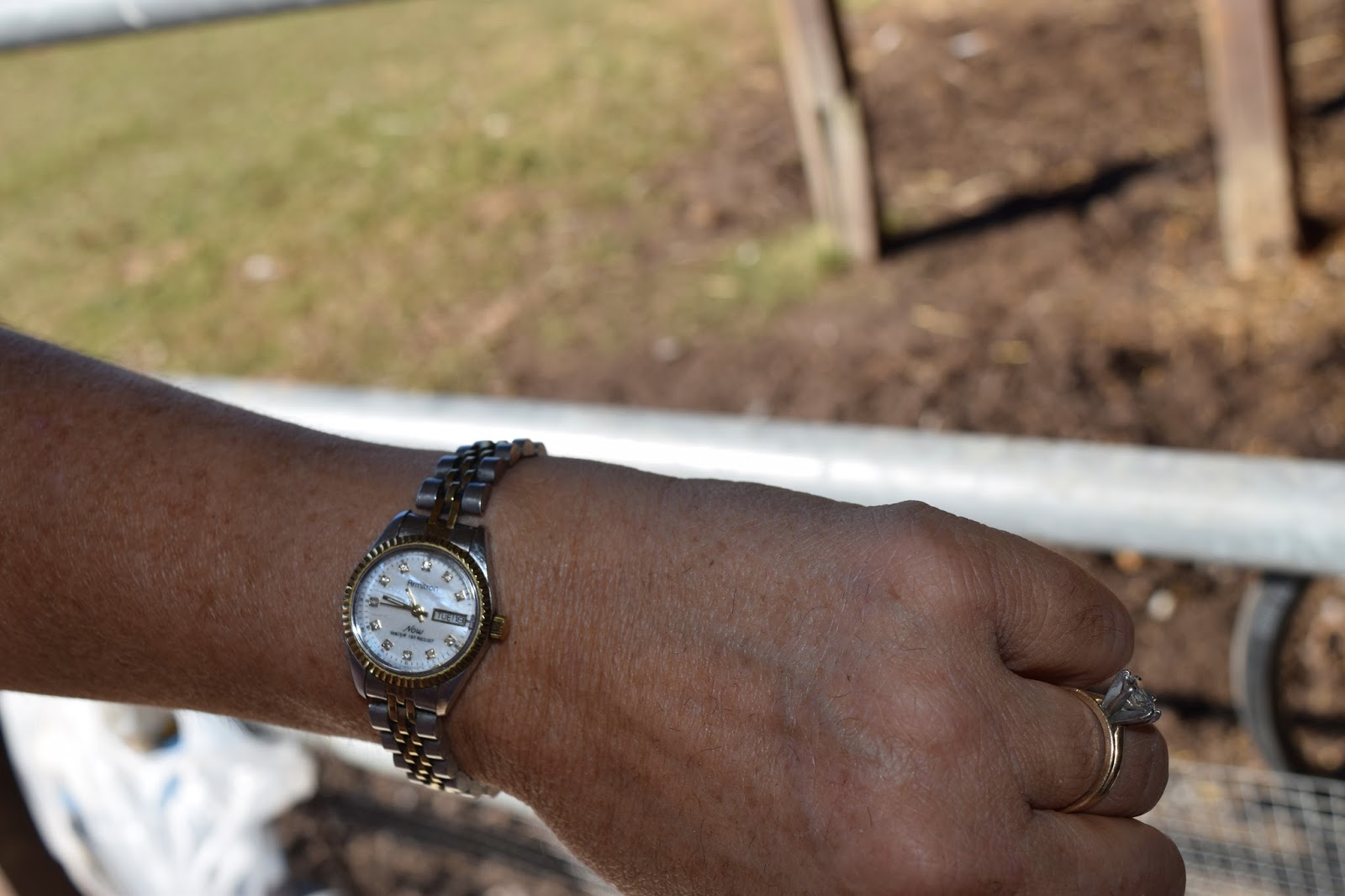 After the last teat is dipped, count at least 30 seconds.  This is the minimum time needed for the dip to do its job. 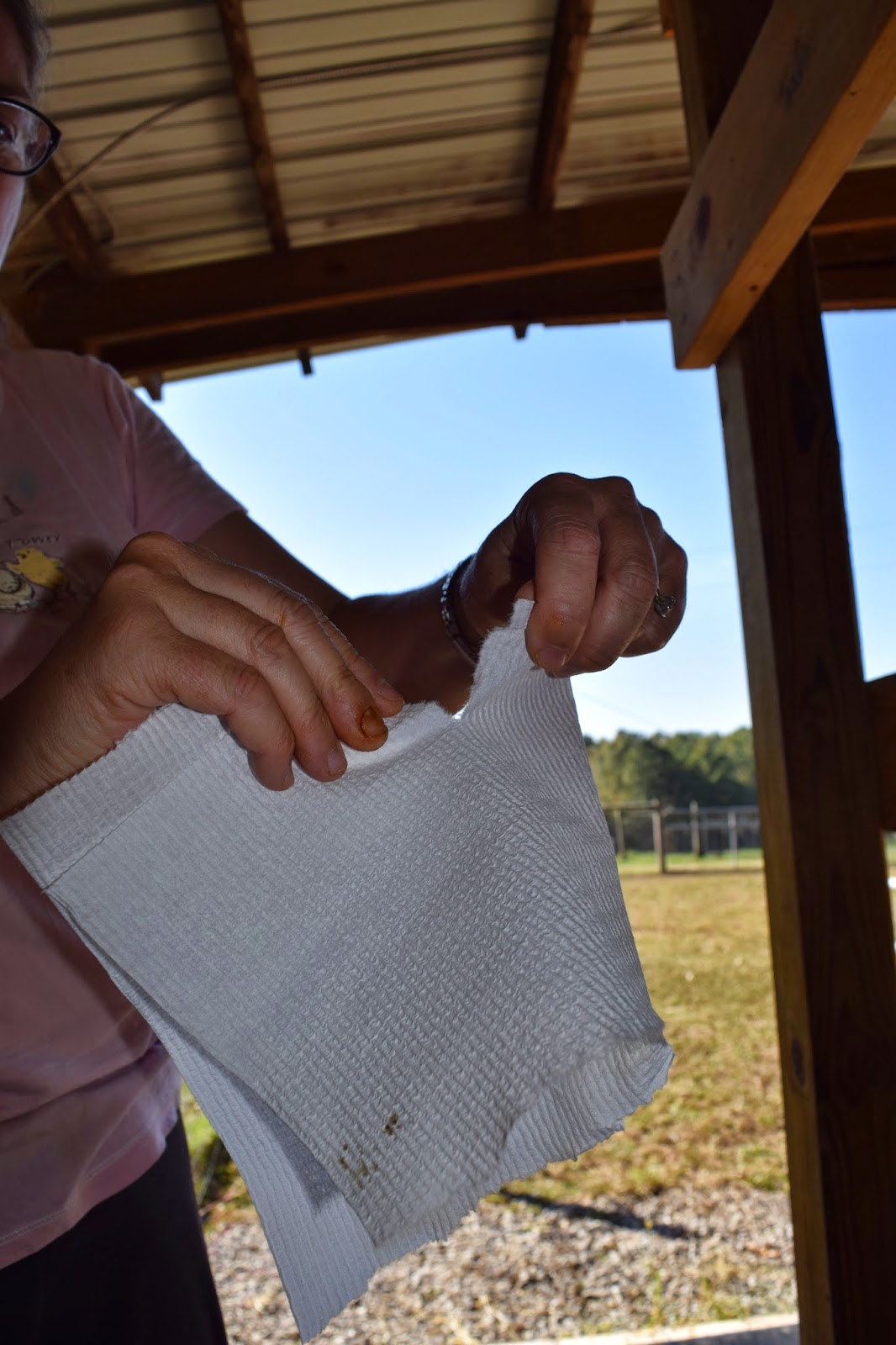 (I keep the roll of paper towels up high on the shelf where they stay clean.) 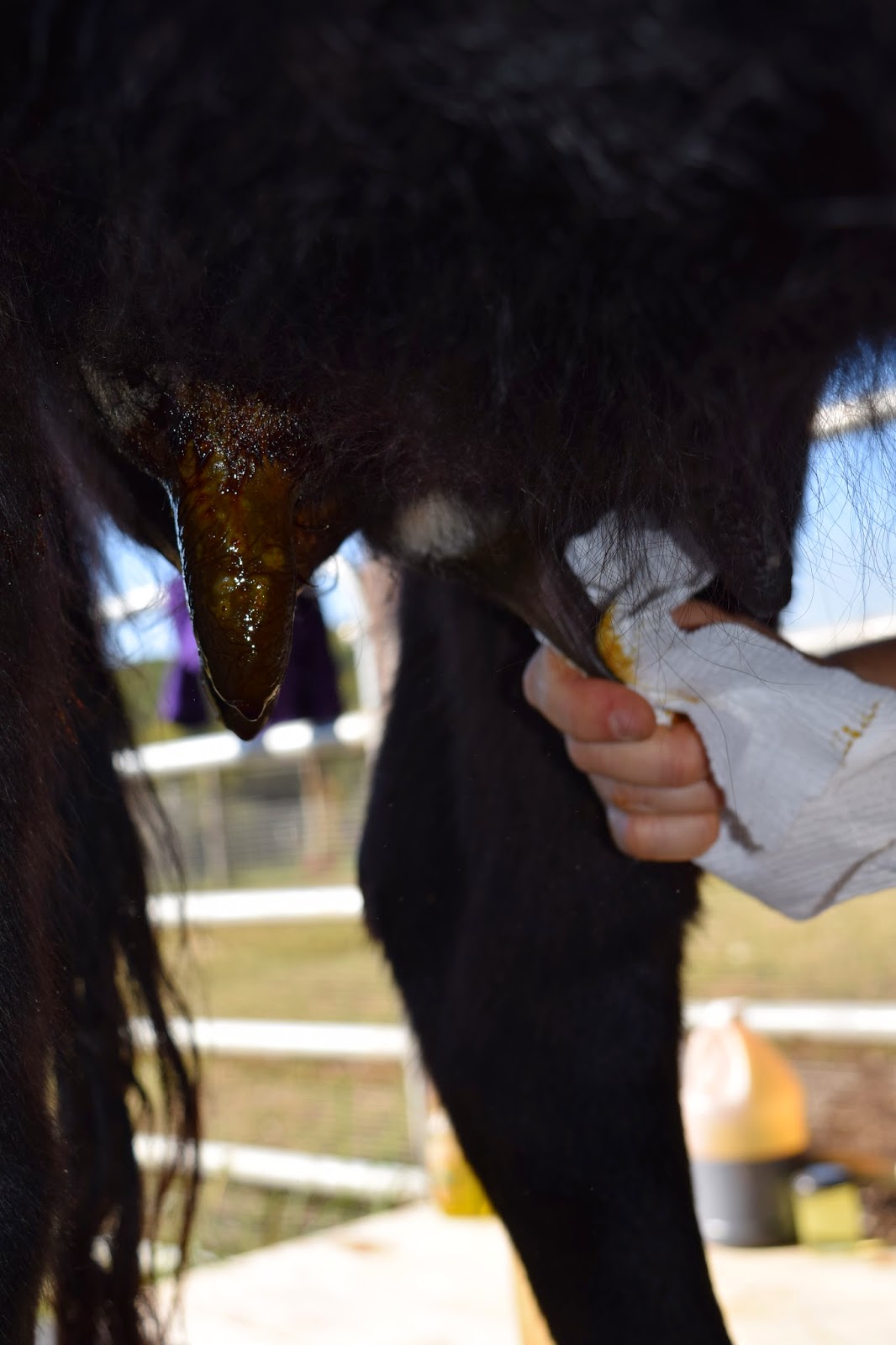 Firmly wipe each teat with a separate piece of paper towel, wiping the entire teat, including the orifice.

(Some people use sanitized rags.  Use two rags, a separate side for each teat.) 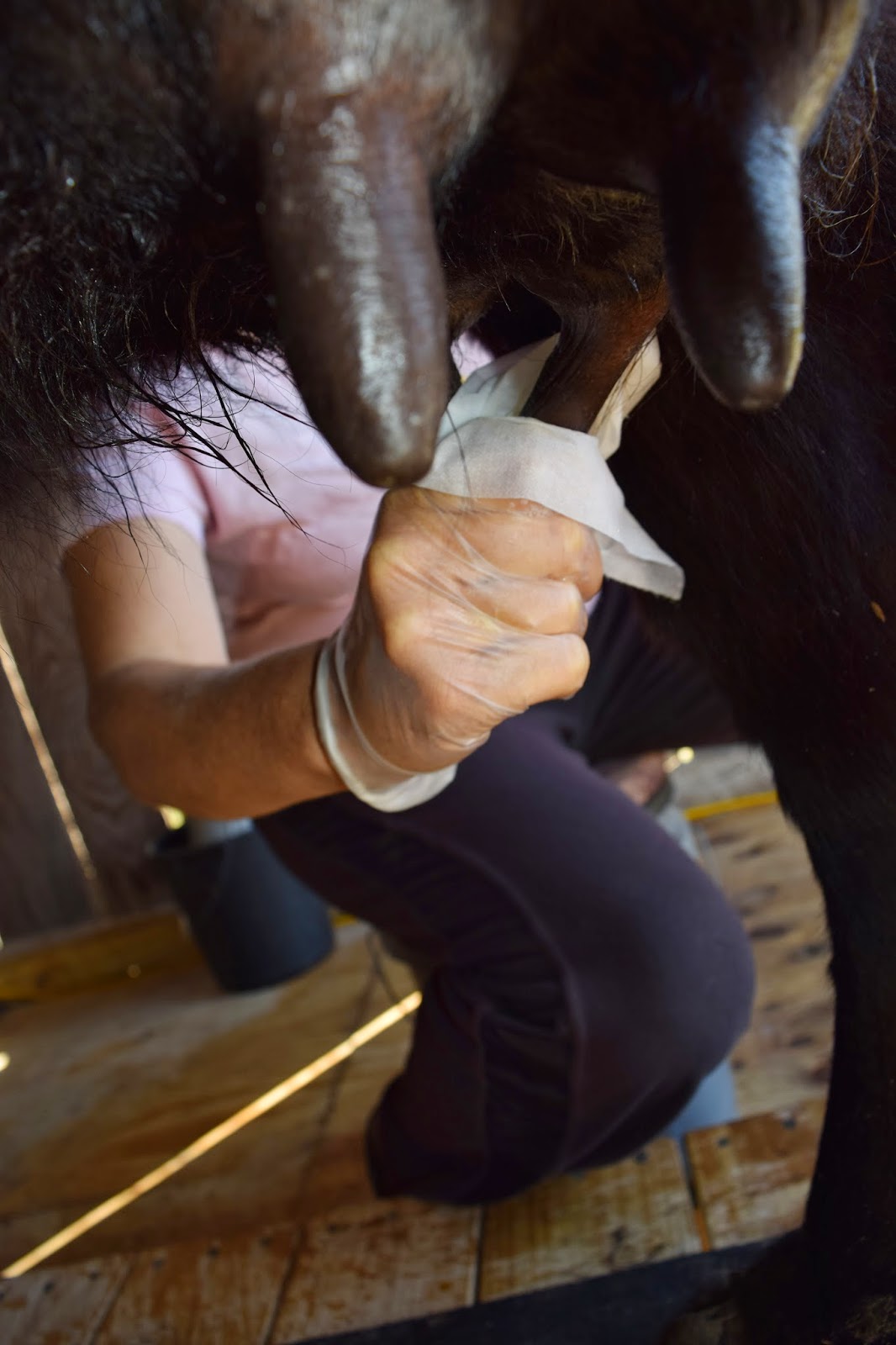 Wipe each teat with a separate commercial teat wipe, including the orifice.

I use Milk Check wipes from Hamby.  Using four per milking, this works out to 17 cents per milking, a cost that I find quite reasonable. 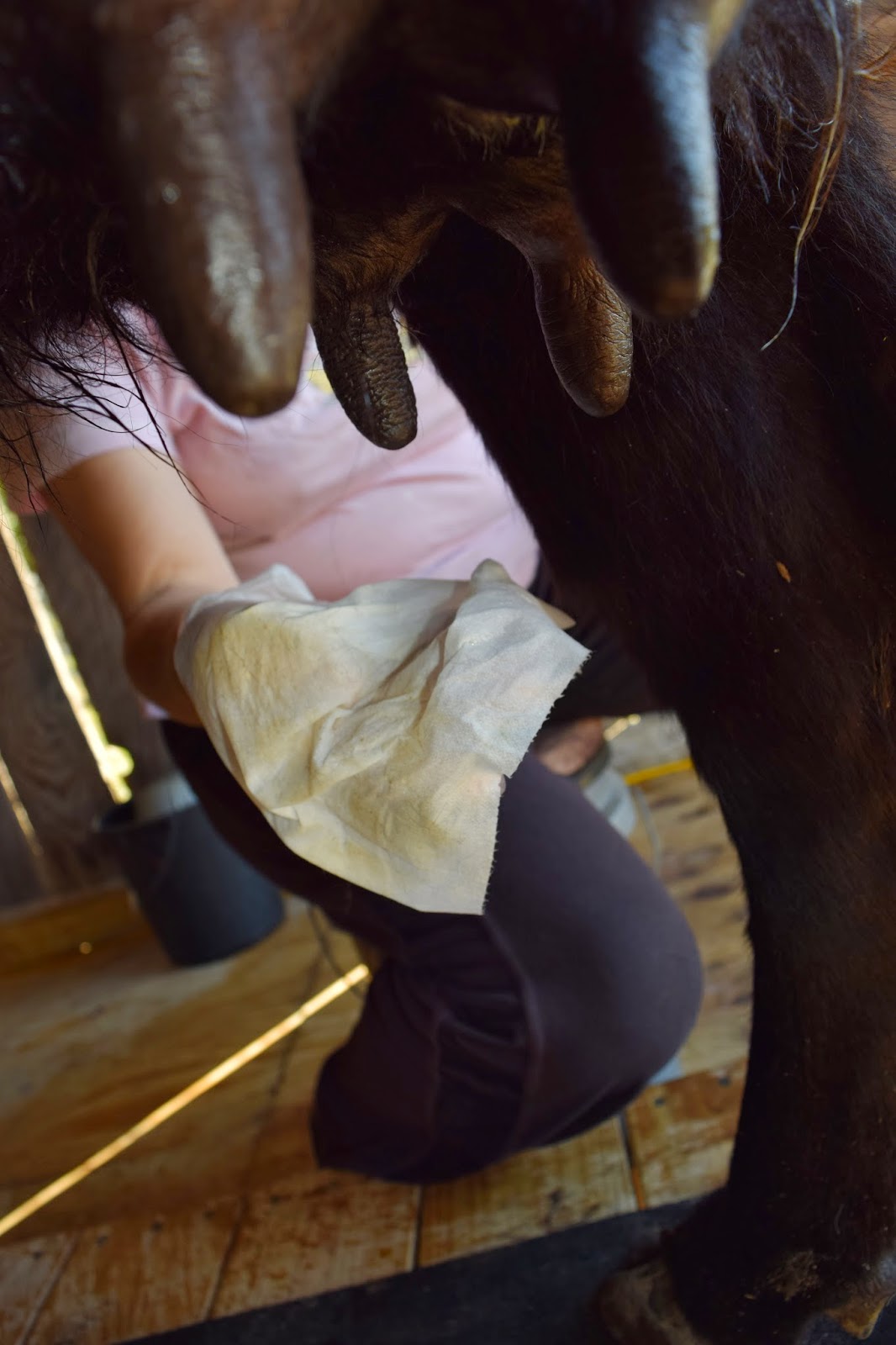 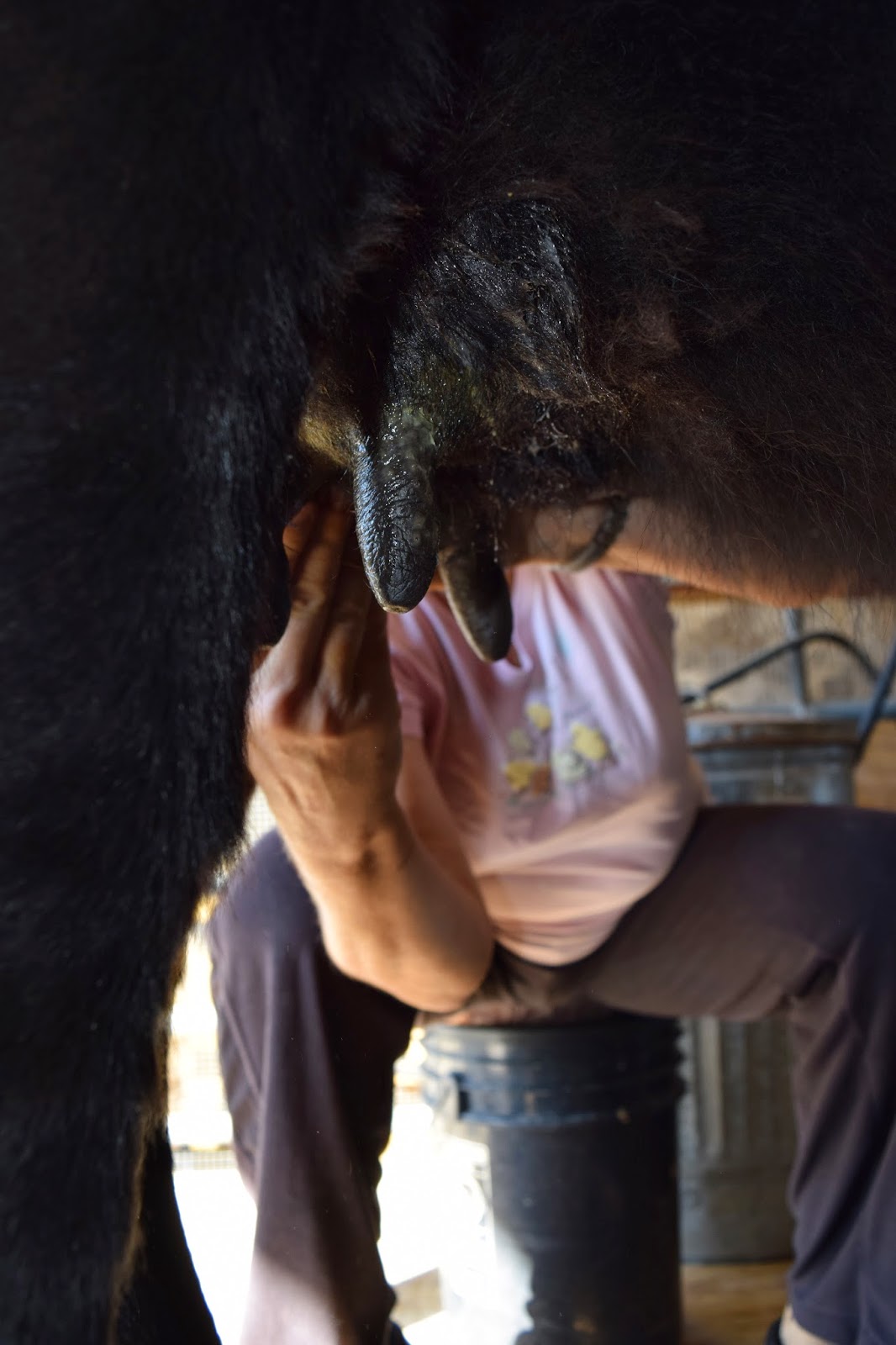 Apply Bag Balm to the teats.  This keeps the teats moisturized and makes it easier to strip without pulling the skin of the teats. 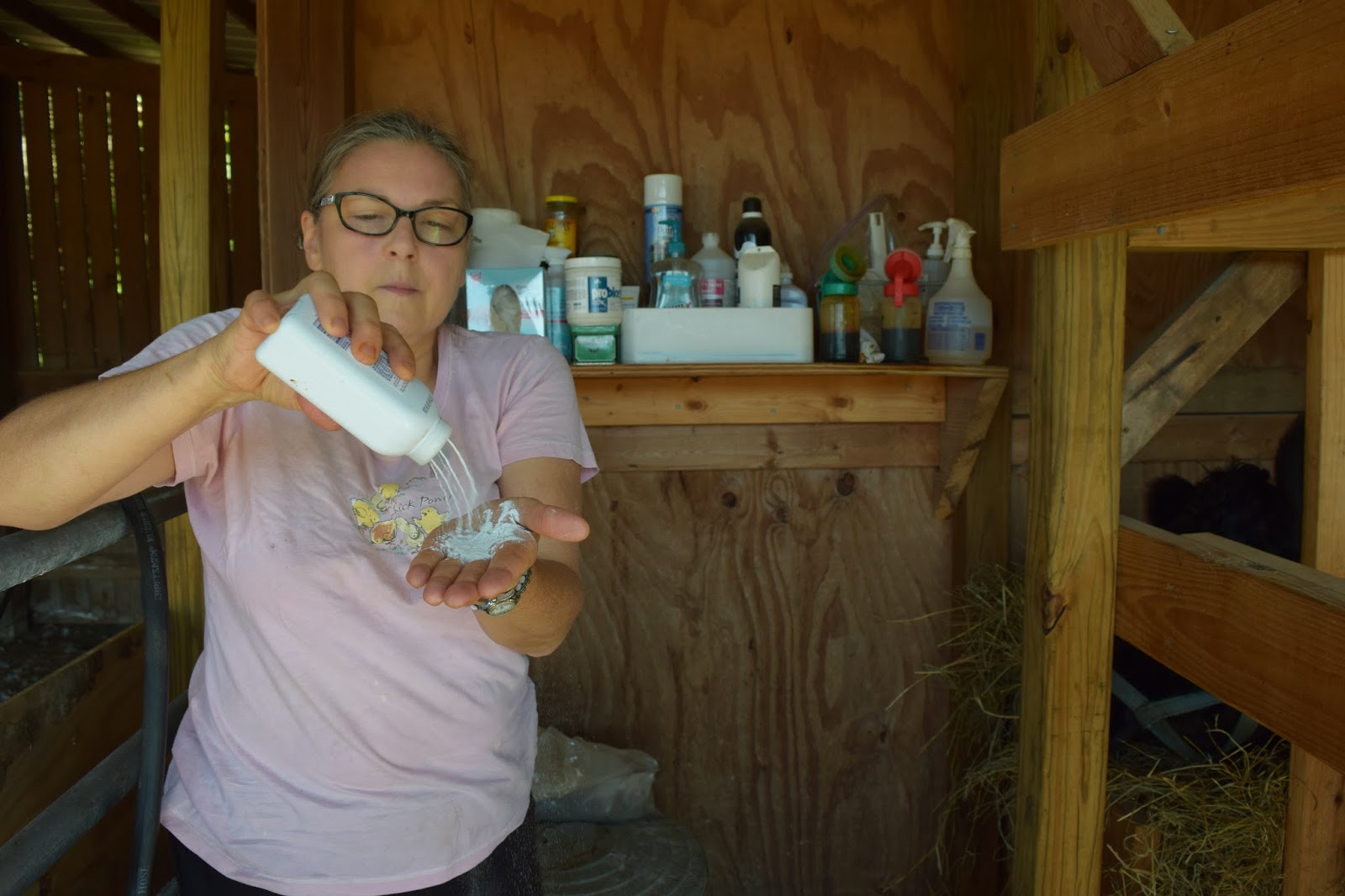 Optional:  If my gloves aren't powdered or I'm sweaty and have a hard time getting gloves on, I put a bit of baby powder on my hands.  (Sorry about the awful photos of me--just try to concentrate on the process and the beautiful cow!) 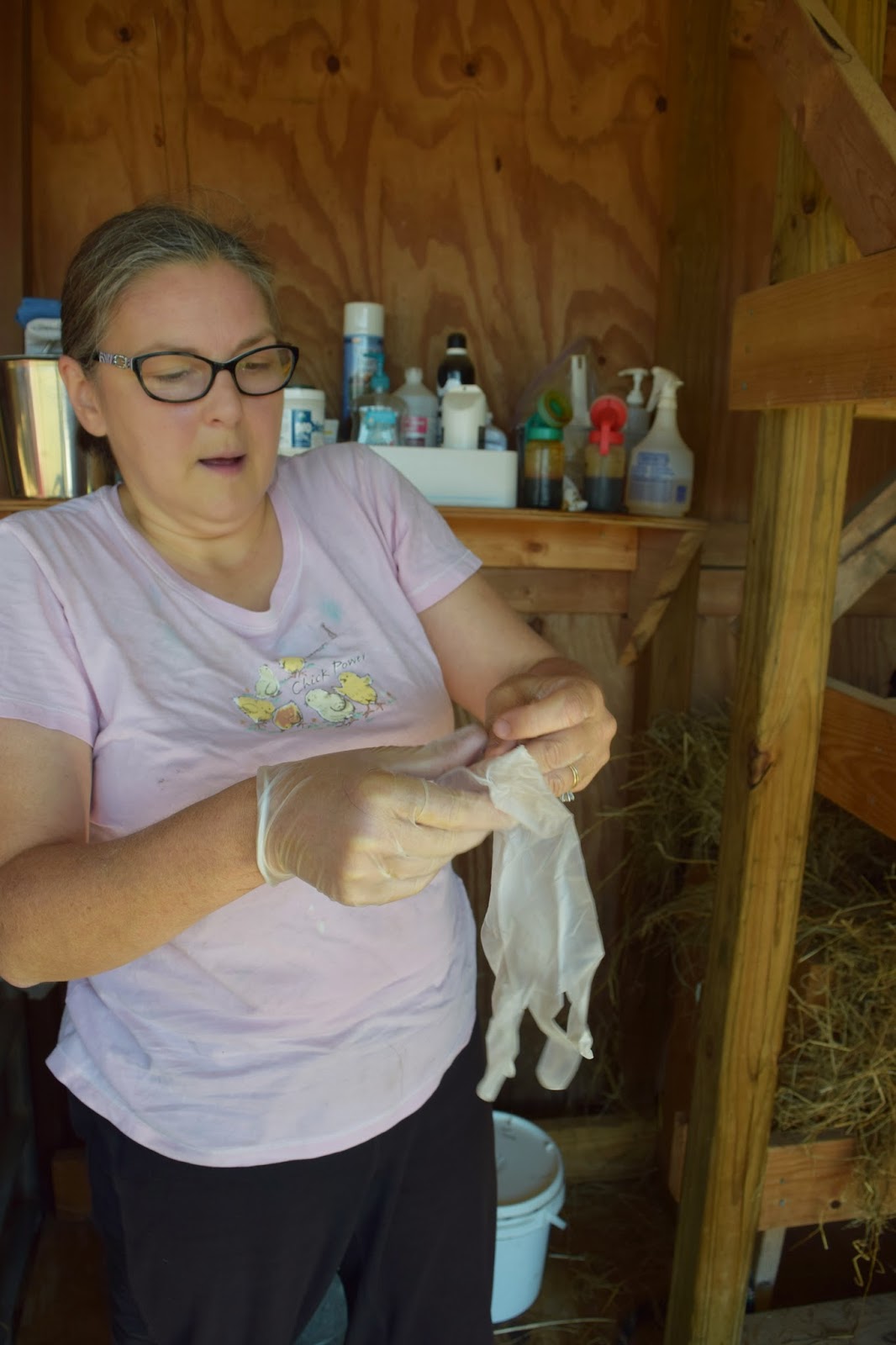 Why do I use gloves?  Research has shown that the use of gloves for milking reduces mastitis.  I often have splits, cracks or cuts on my hands that could harbor germs, so I think it's especially important for me.

Why do I wait till now to put the gloves on?  Because up till now I really haven't touched the teats, but I'm about ready to. 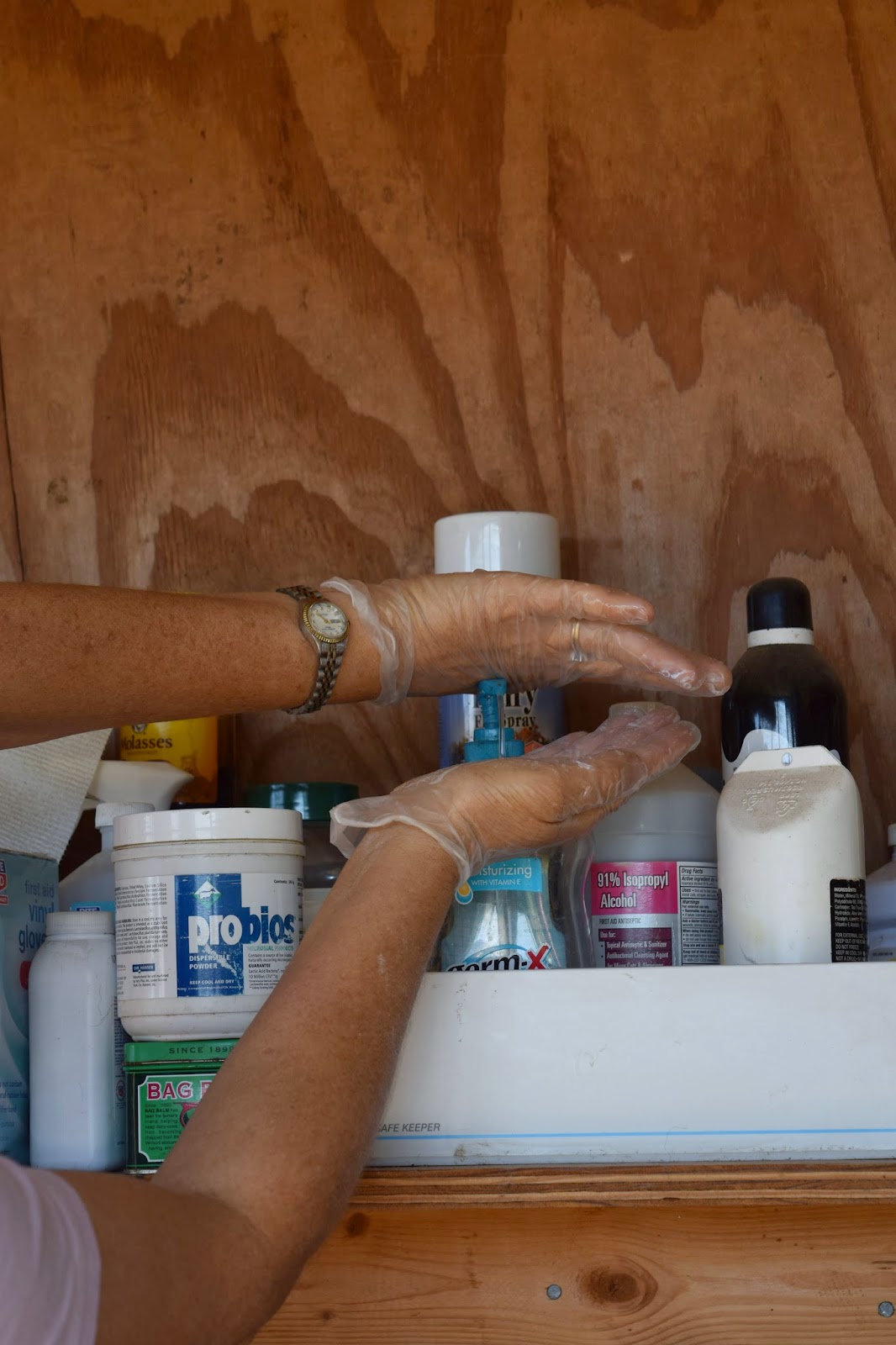 One nice thing about wearing gloves is that any time you need to re-clean your hands during milking, it's easy to sanitize them with an alcohol-based sanitizer without being hard on your skin.

NOTE that I do not touch the pump with any part of my hand that will touch the teat.  I turn my hand upside down and use the back to pump.

If I need to stop milking and touch the calf, a lead rope, or a shovel to catch manure--I sanitize.  Many days I never use the sanitizer, but it's there if I need it. 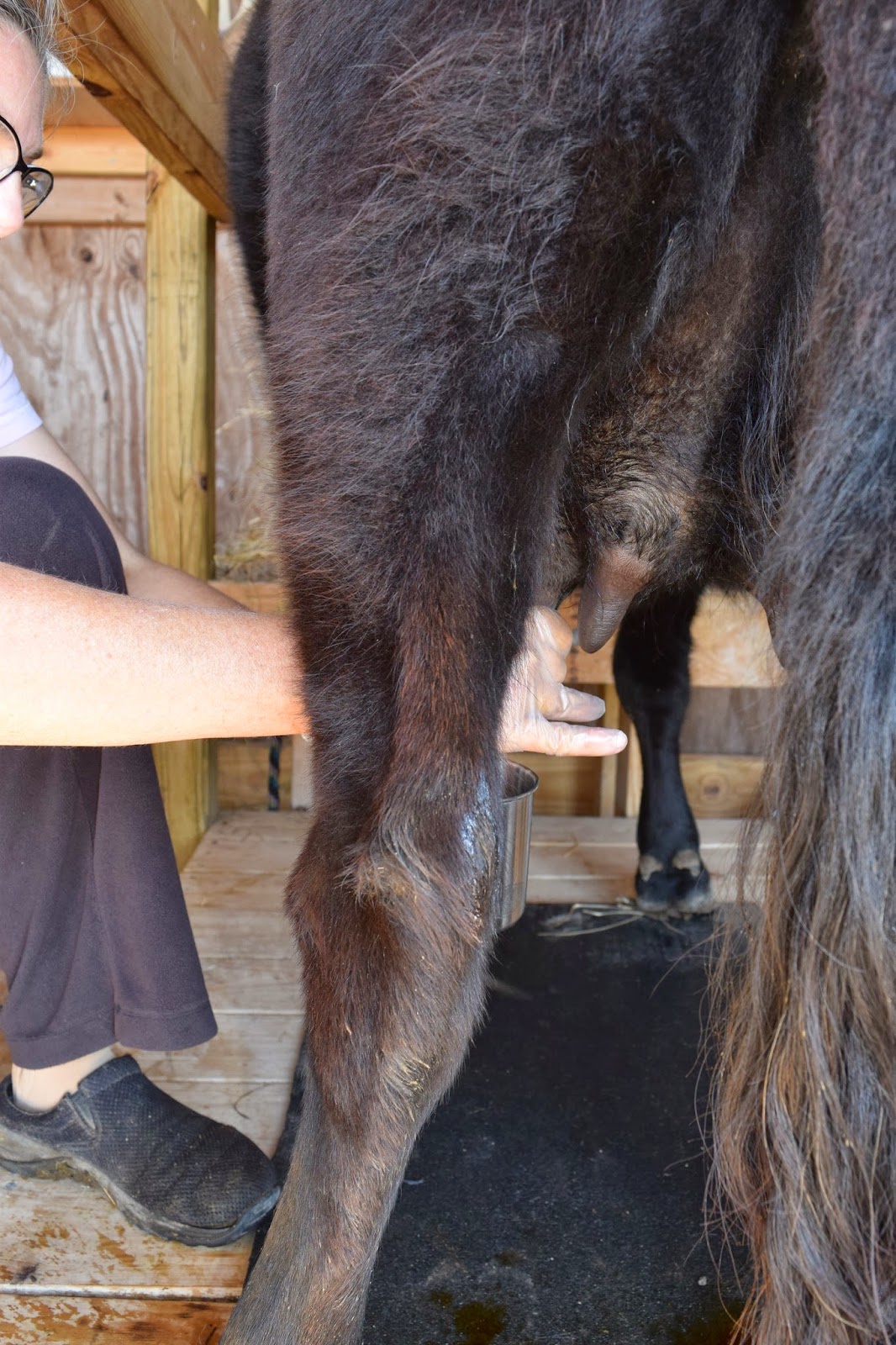 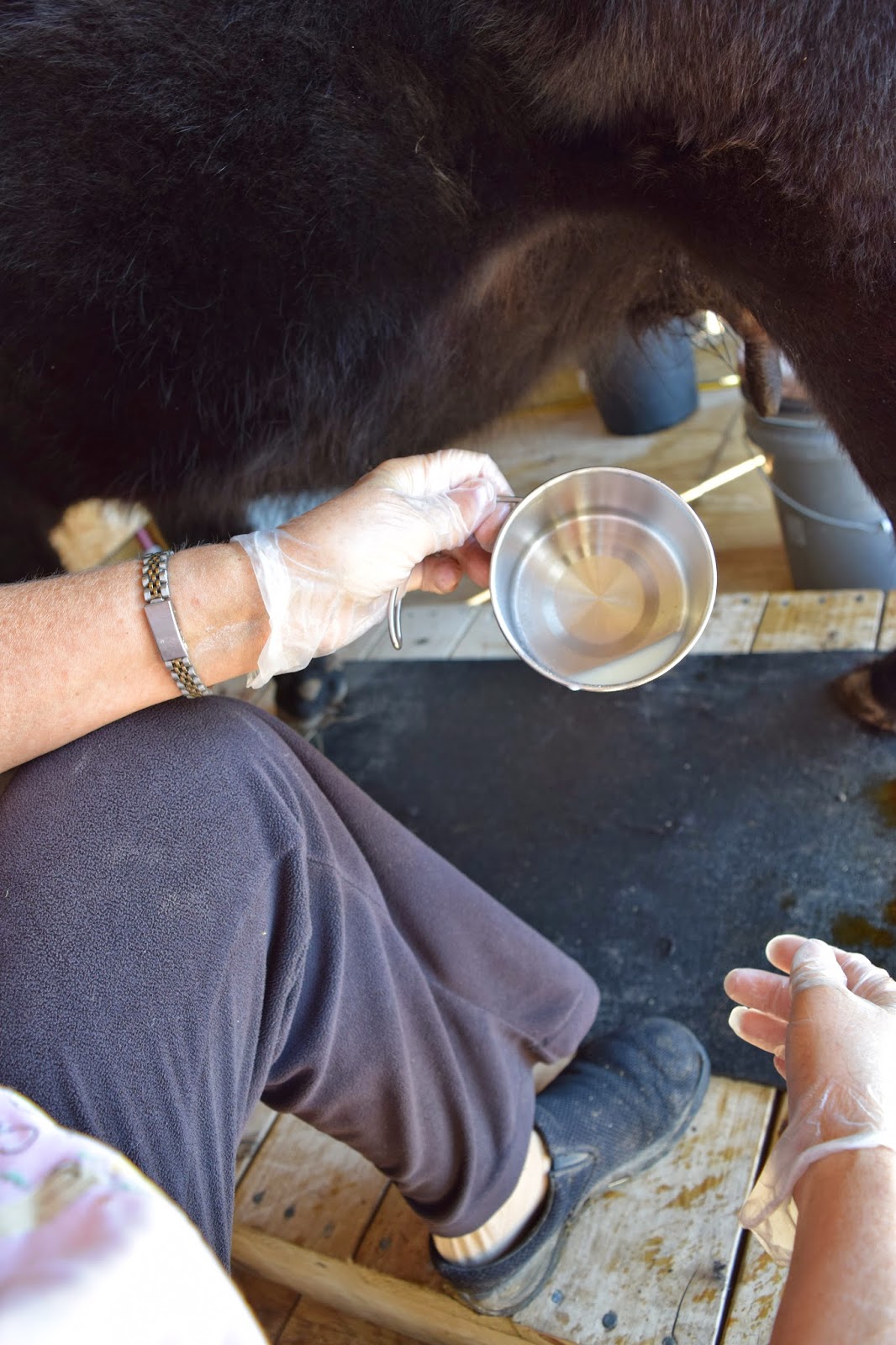 (I do have a strip cup which I forgot to bring to the barn.)

Note the lightweight stall mat under Ebby's feet.  There's also a larger one behind the stanchion for the cows to walk over as they enter and exit.  Cows do occasionally pee in the stanchion, and mats prevent slips and falls for both cow and milker--says the voice of experience! 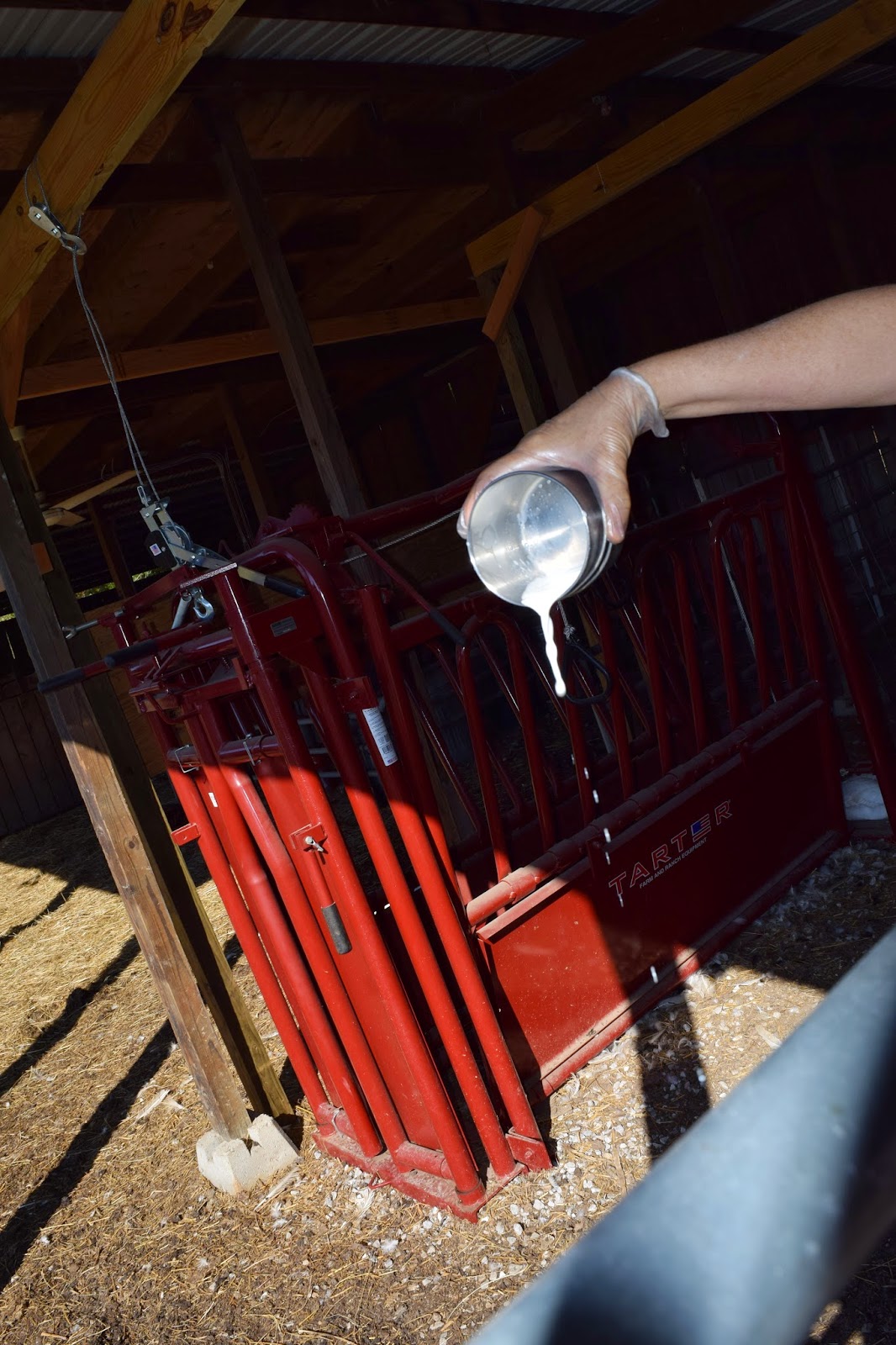 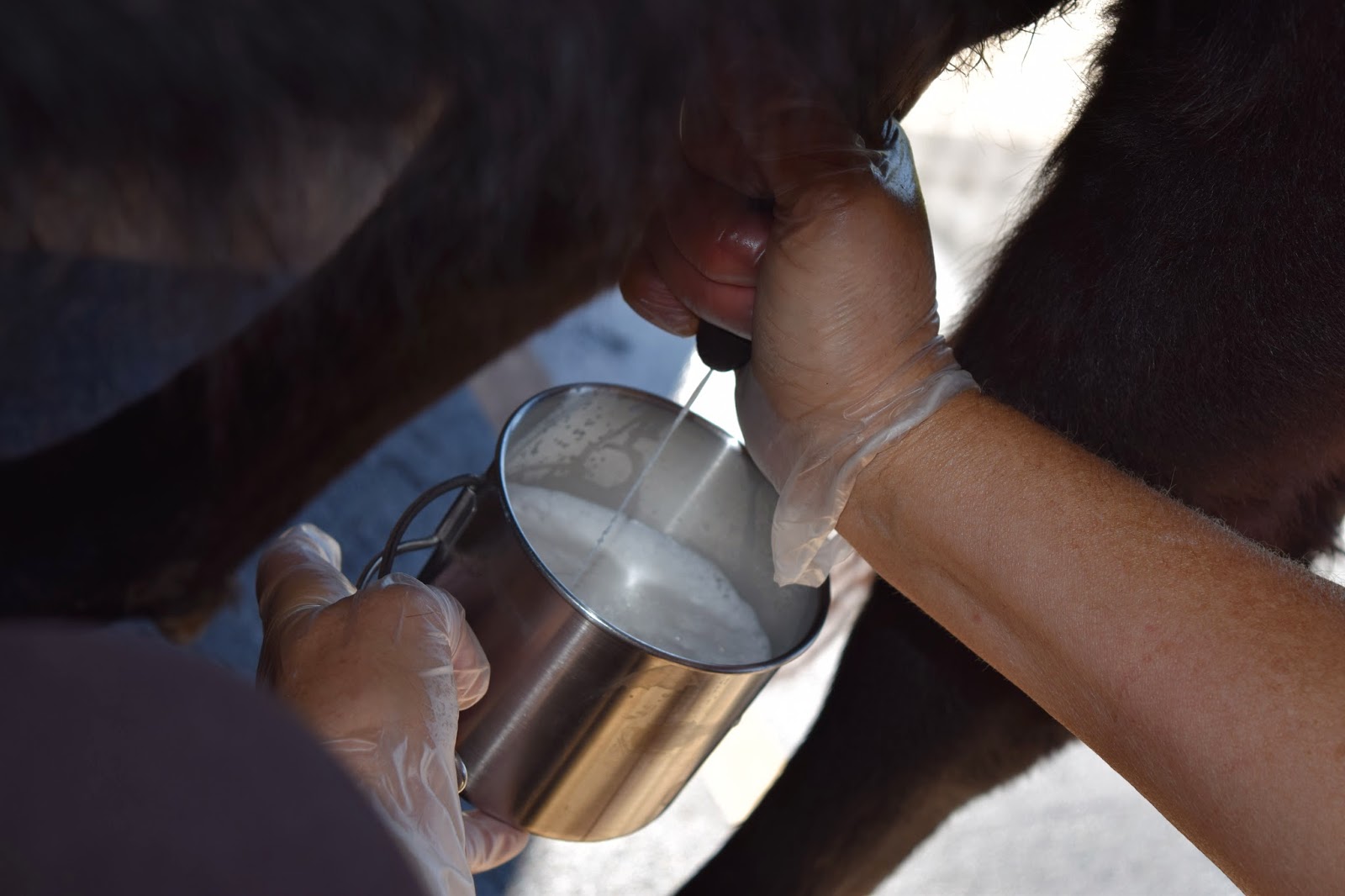 Milk away!  When the cup gets fairly full, I get up and dump it in the covered bucket, then sit back down.  I do it this way because: 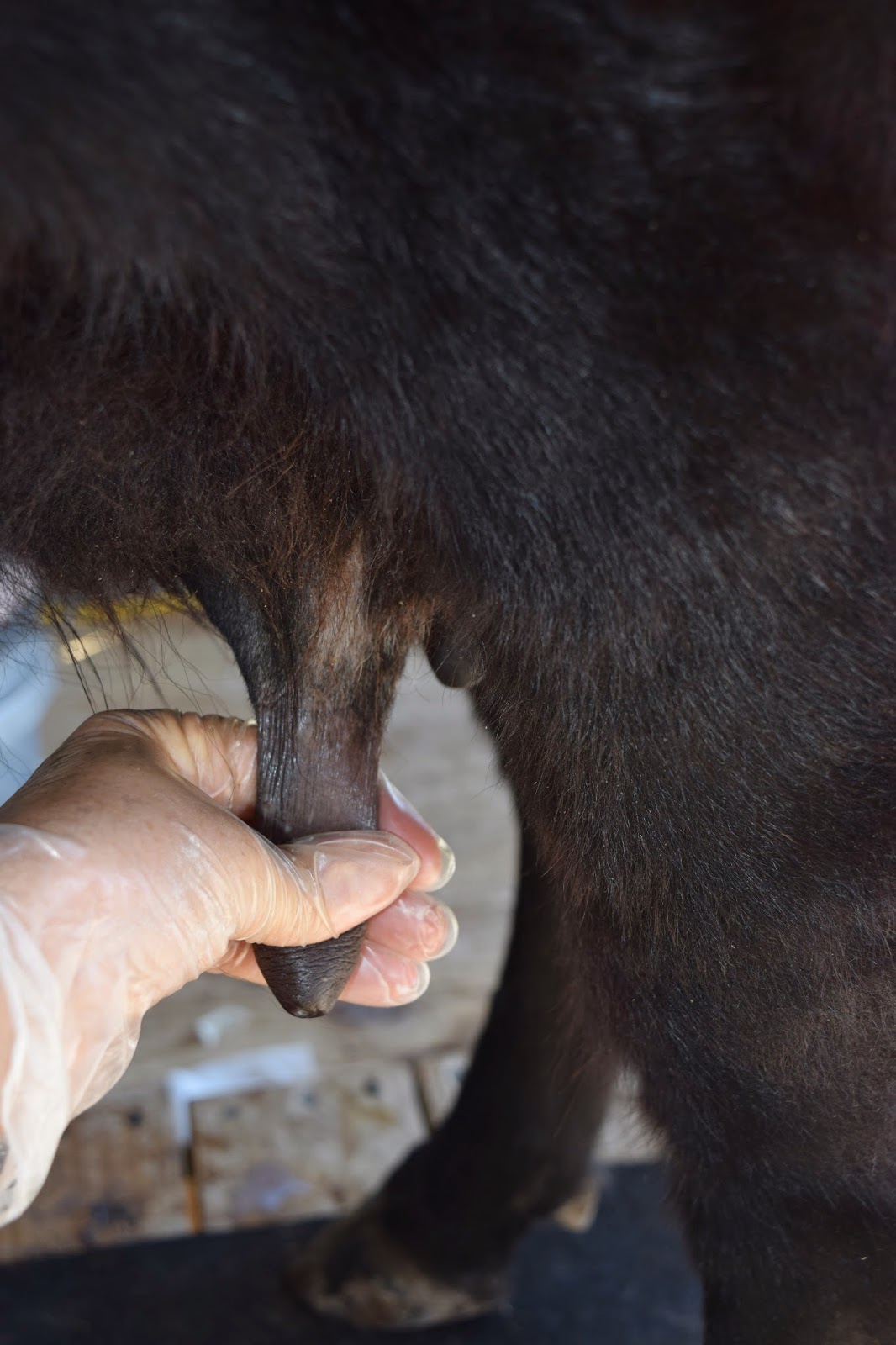 To finish milking, strip each teat until no more milk comes out.  I strip at least 10 times. 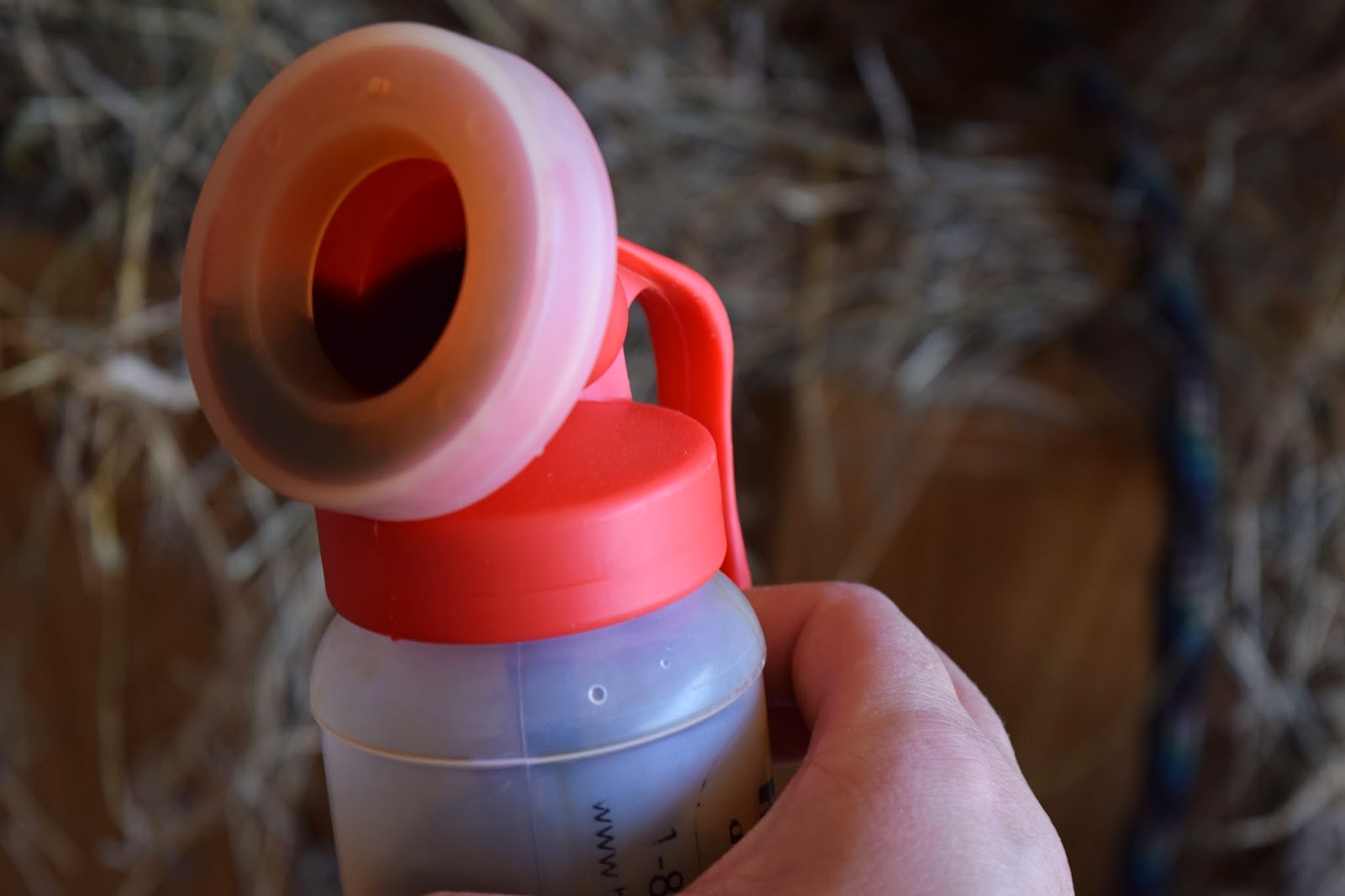 Take the RED cup for STOP, and squeeze some into the reservoir. 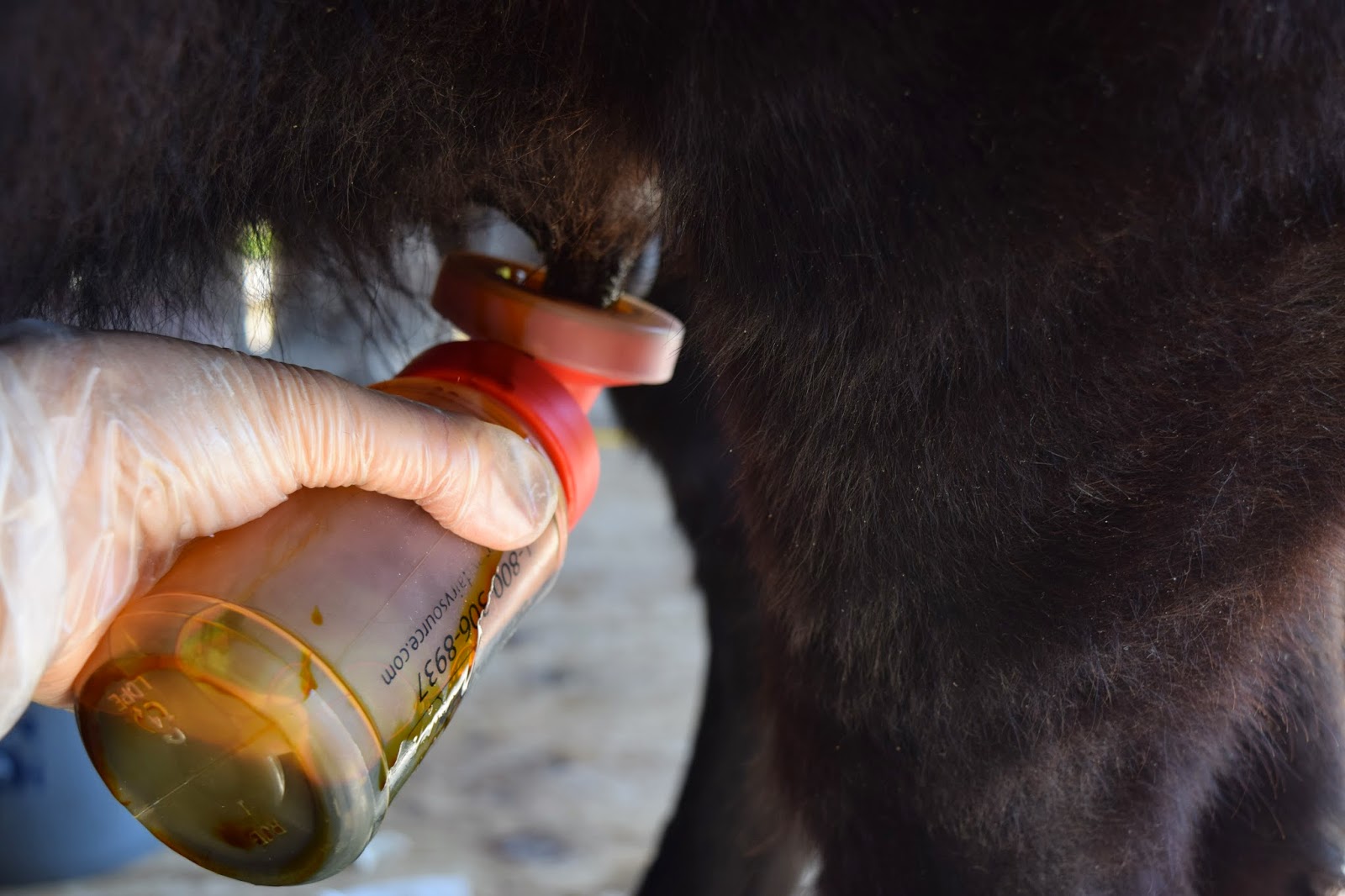 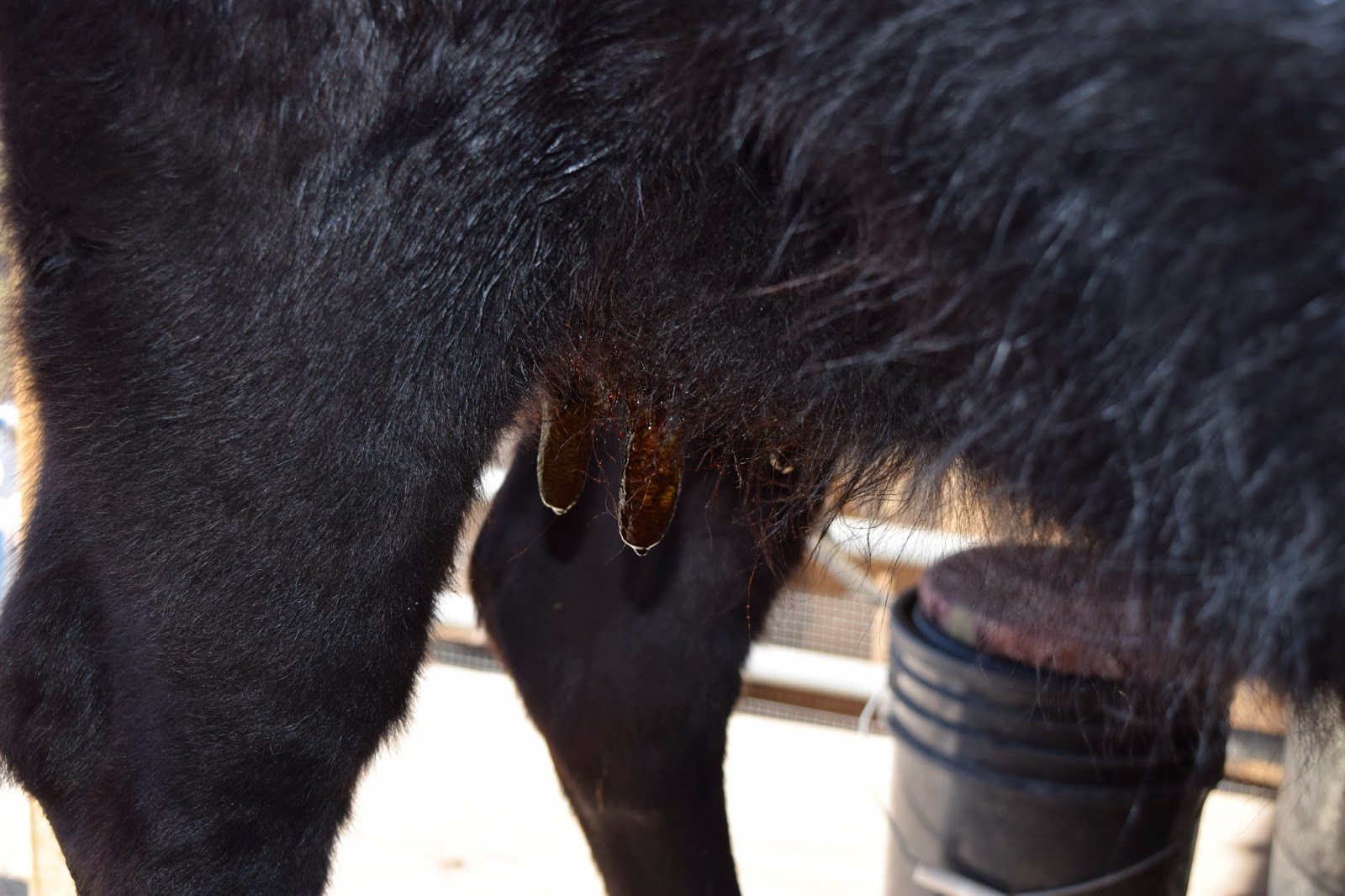 Leave the dip on--do not wipe off.

If the calf is still nursing, I wait 30 seconds and then blot each teat with a separate piece of paper towel instead of wiping firmly. 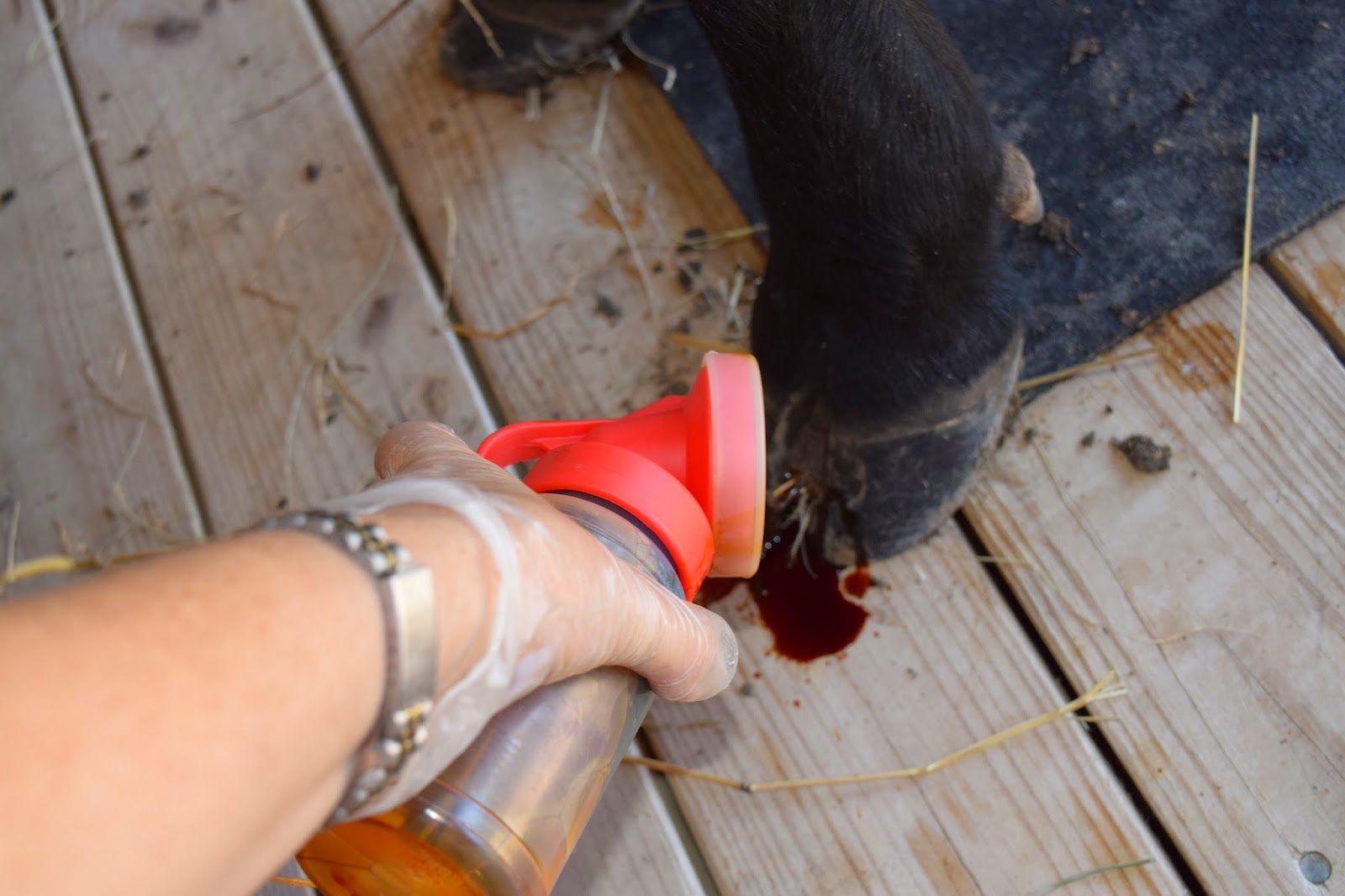 You can dump the excess dip on a hoof.  Some people don't like to keep the dip that's left in the reservoir, while others leave it to eliminate waste. 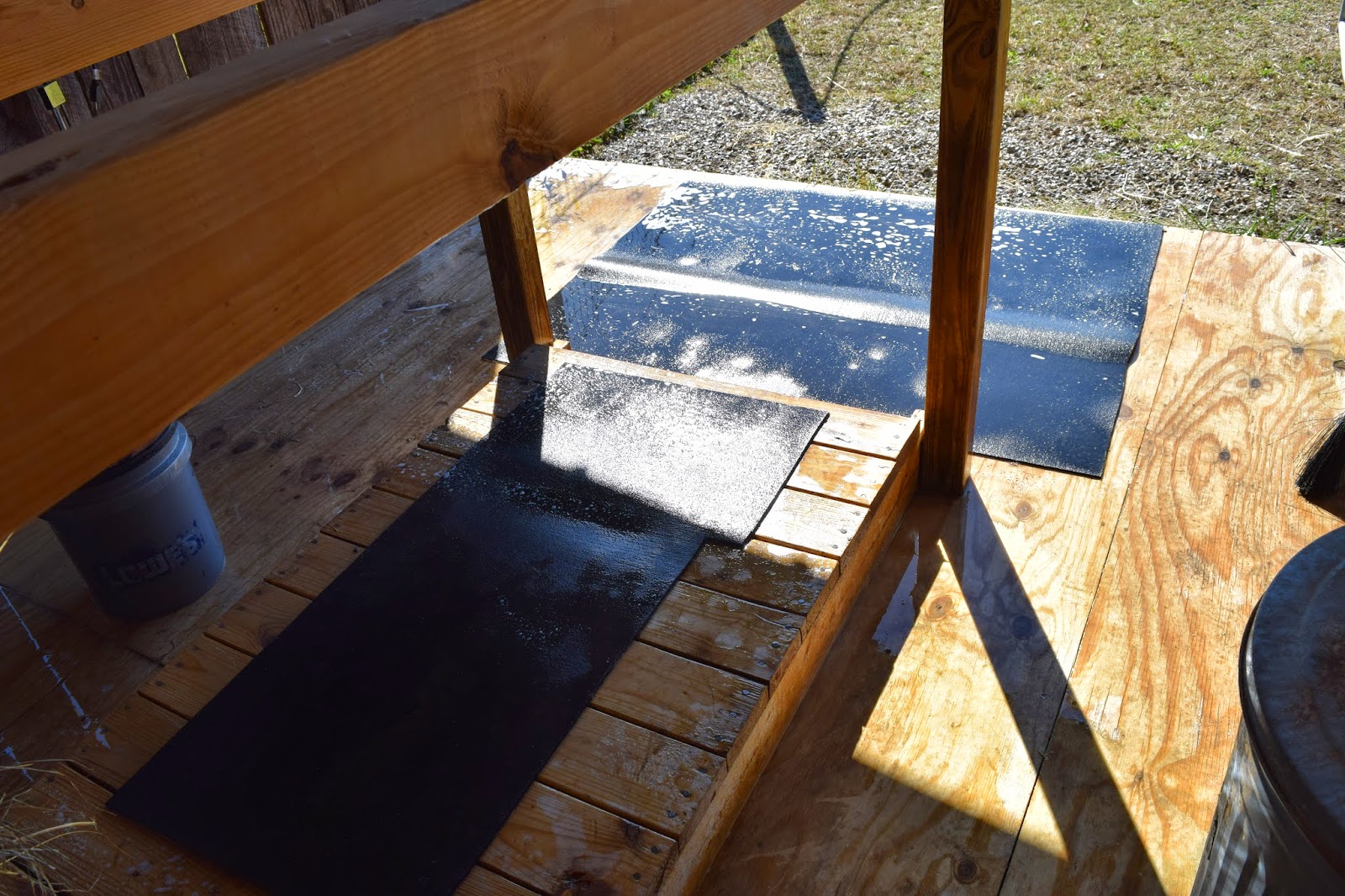 Let the cow out of the stanchion, and clean up.  Ebby is not a pooper, but she did pee, so I sprayed bleach-water (that I keep in a spray bottle up on the shelf) on the stanchion and mats where the pee went.  Then I swept away the bleach water, and debris that Ebby and I tracked in. 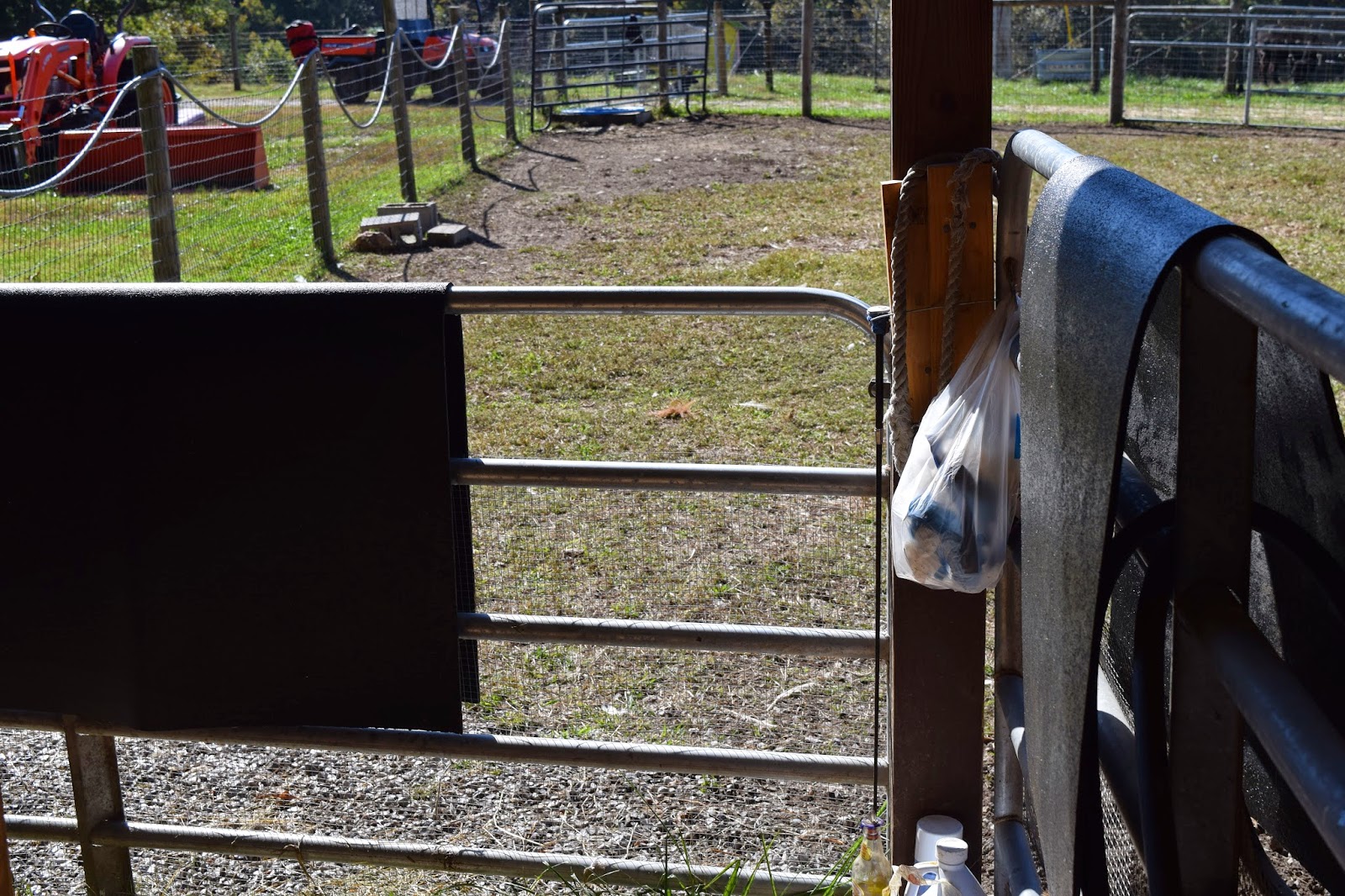 Hang the mats to dry, if needed. 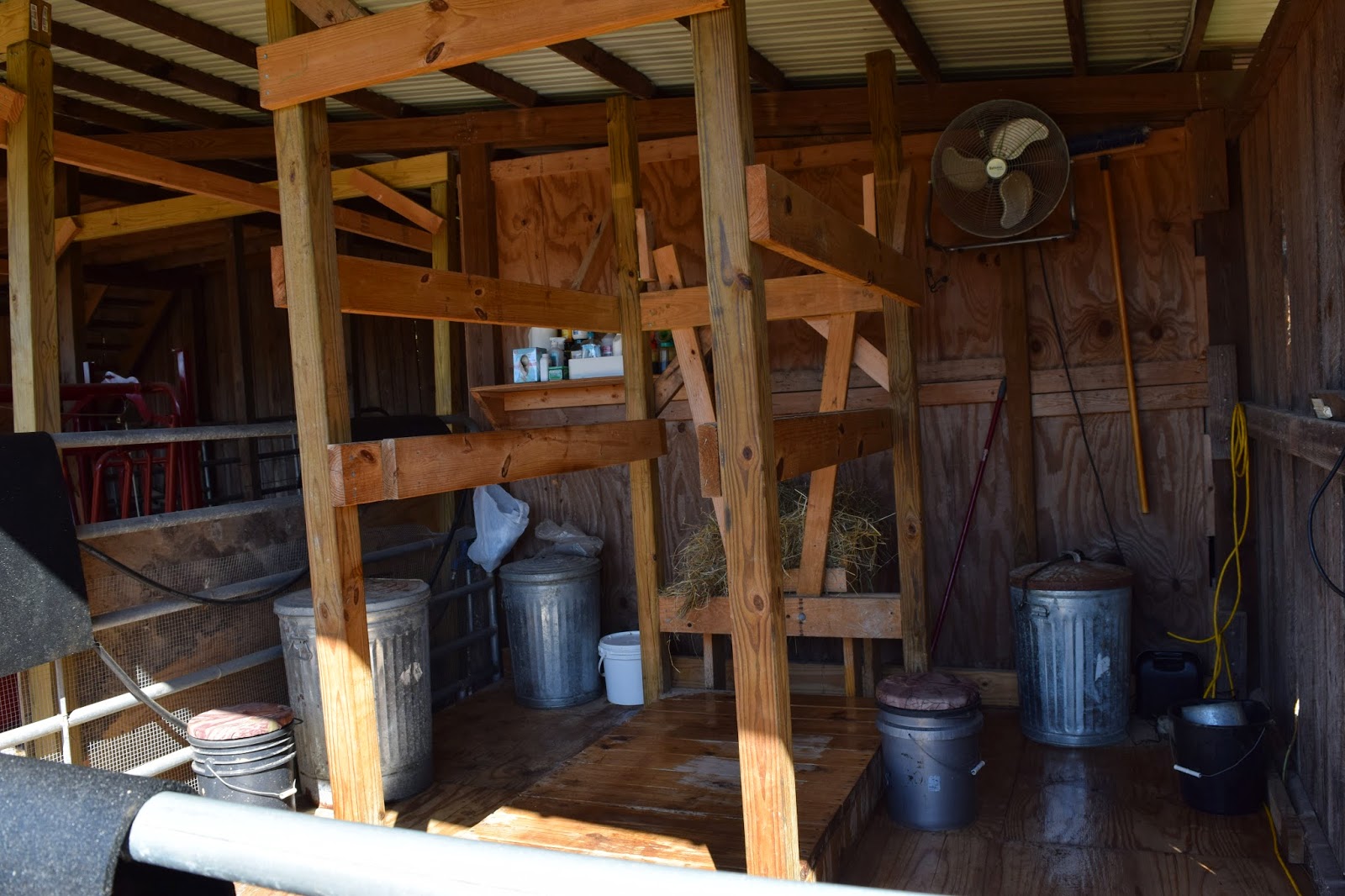 Lock the gate and take the milk back to the house.  The stanchion is clean and ready to go tomorrow.

With so many photos and detailed explanations, it may seem like my udder prep is really time-consuming.  It's not. When I get into the routine (and I'm not stopping to let someone take photos), it only takes a few minutes.  I believe it is time well spent, and I like the satisfaction of knowing that I have done everything possible to keep my cow's udder healthy and our milk clean.

Here is the condensed, simple version.

Please feel free to ask questions or make comments.  I'll do a follow-up post to answer any questions and share some resources that have helped me.
Posted by Susan at 3:09 PM