We're in a bull market here at Zephyr Hill Farm.  Ebby's calf was born today, a black, horned bull.  He may not be the red, homo-polled heifer I was hoping for--but he is healthy and lively and sweet, and we're very thankful for him.

Last night at the 3 am check I could tell Ebby's pins had gone, so I figured today would be the day.  Ebby's restless pacing of the pasture all morning confirmed it.  By 2:30 all she had done was get up and down in various places for the last half hour, so I went into the house to verify how long the various stages of labor should take.

I came back out at 2:53 to see bare hooves, quite a different sight from Ebby's calving last year.  Concerned that with the water bag broken the calf might aspirate amniotic fluid, I called the vet.  It was possible, he said, but advised me to let her push the calf out by herself if she could.  Ebby could--and did.  By 3:04 the head was out, and I could clear the calf's mouth of fluids.  By 3:05 the calf was on the ground.  Nine minutes later it was trying to stand, and by the time it was eleven minutes old, it was on its feet. 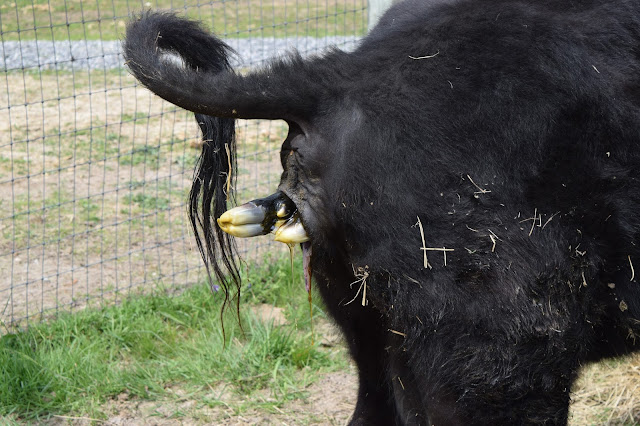 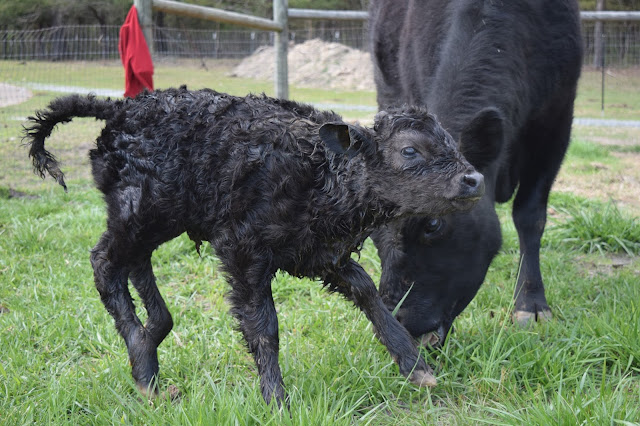 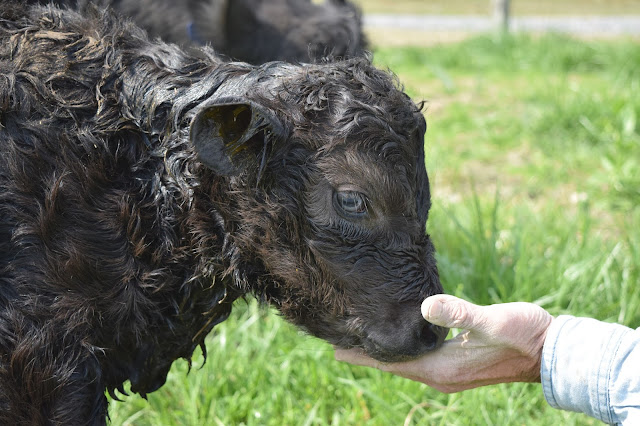 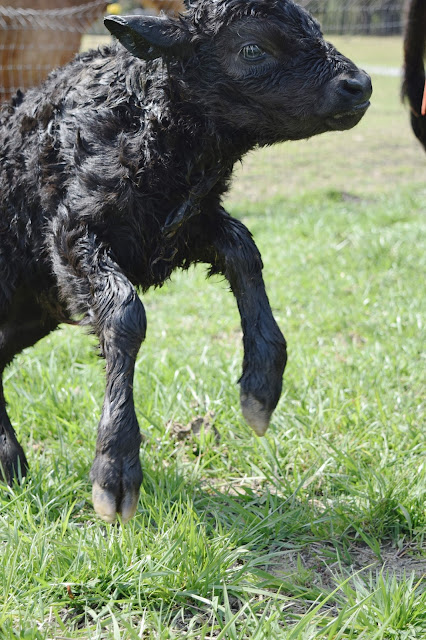 Although Ebby's poll hair predicted her calf would be a heifer, and my first glimpse of its sweet face made me think it was, it soon turned out that "she" was really a he.

Unlike many bull calves, this little guy was quick to find the udder and nurse--and even quicker to begin exploring. 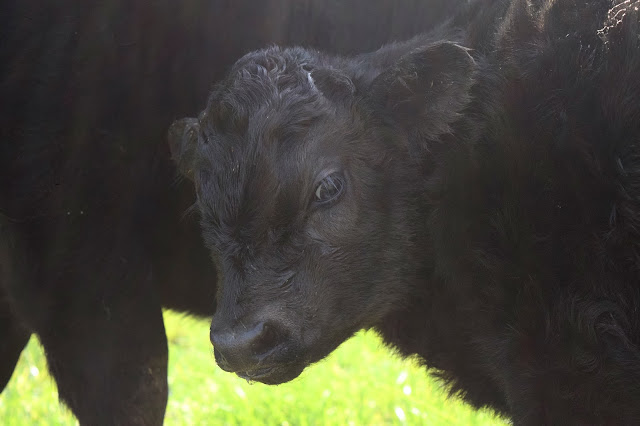 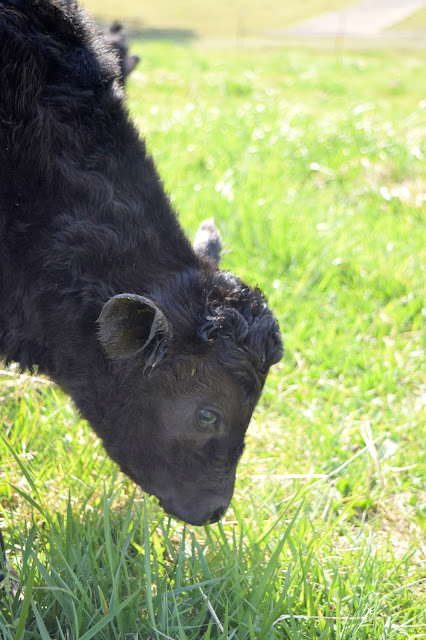 . . . checked out the grass, took a brief nap, and started exploring again.  He didn't just walk, though--he bucked his way along.

It was a lovely to sit in the green grass watching a healthy, lively calf interact with the warm, sunny world.  A gentle breeze blew over us--a perfect April day. 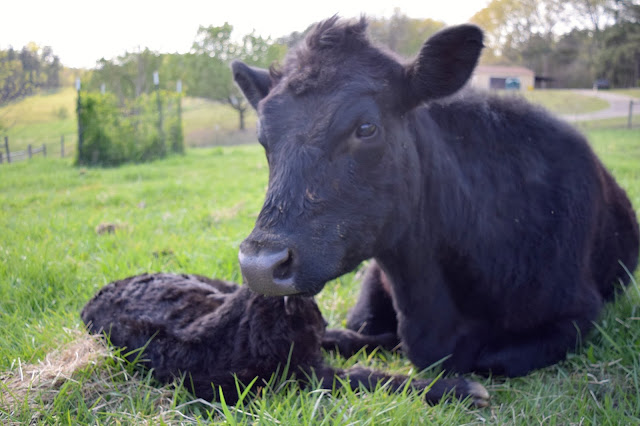 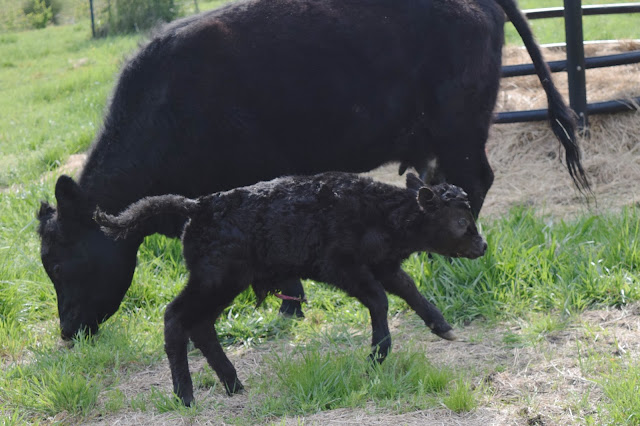 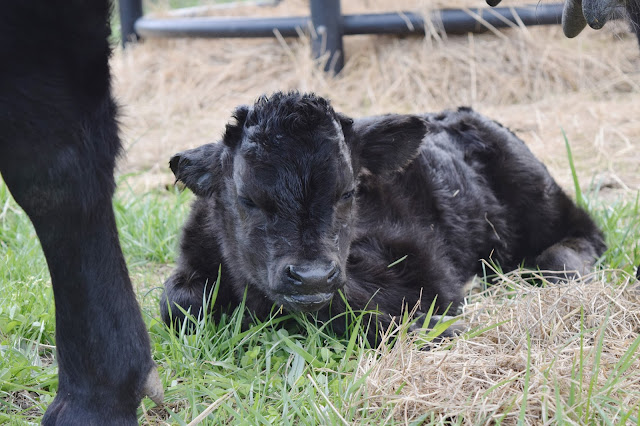 Looking at his face now, it's clear this little calf is all boy!  However, between his birthday being close to April Fool's Day and Ebby's trick with her "heifer poll hair," I decided to name him ZH Royal Pretender.  We're already calling him "Bucky" as it seems to suit this happy little buckaroo.

Rain and thunderstorms were predicted for tonight, so before it got dark we walked down to the bottom of the pasture to fetch Ebby and Bucky.  Herb packed 55 lbs. of calf up the steep hill with Ebby following anxiously along.  Bucky cooperated surprisingly well, without struggling to escape.  He and Ebby were safely ensconced in a stall about five minutes before the lightning and rain hit.  That means a good night's sleep for me, knowing our bull market will safely weather the storm.