The Cost of Raising a Steer: How Much Does Our Beef Cost Us?

I just calculated the cost of our beef from the day we brought T-bone home on July 23, 2011 to the day we put the beef in the freezer in early December, 2012.

We bought T-bone from Gabriella Nanci, a Dexter breeder in the Atlanta area.  He was about 8 months old, the same age as Siobhan (in front in the photo above, still wearing her fuzzy calf coat).  Because T-bone was on the small side, we got him for $400.  T-bone was still intact when we got to Gabriella's farm, but she helped Herb use the California bander to "steer" him so we had no vet cost for that.  Gabriella told us he would gain weight better if left intact, but at his age we were worried about him breeding the cows so we opted to castrate him immediately. 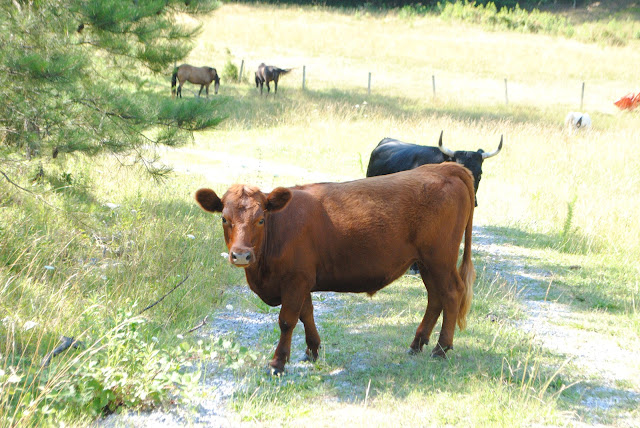 That first winter (2011-12) we fed hay to the three cows and two horses.  I'm sure that Angel and Brandy (at 1000+ lbs.) ate more than the cows (with Sara the biggest at about 750 lbs. max).  By June 28, 2012 (almost a year later) T-bone had grown well although his hind end was still on the scrawny side.  Since it's impossible to know exactly how much hay any one animal ate, I calculated the cost as follows: 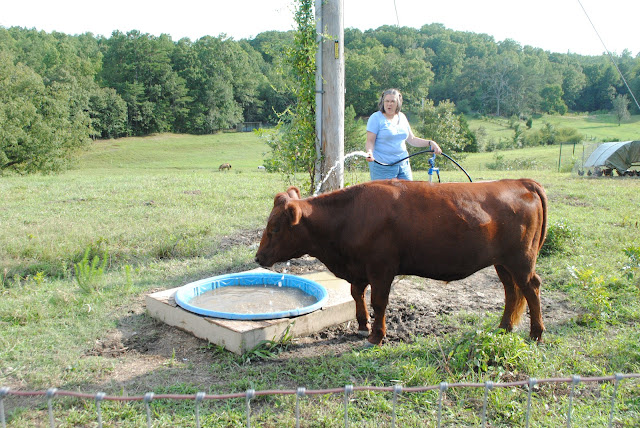 Six weeks later on Aug. 12, 2012, T-bone was showing the results of eating plenty of good green grass, thanks to a rainy July.  The ideal age to butcher a Dexter steer varies between 24 to 30 months.  While discussing the best time with our butcher, Jeff McBryar, he advised that we should butcher T-bone shortly after the first frost when the grass would stop growing.  We could feed him up on hay for a couple of weeks first, but if we tried to over-winter him, he would lose so much condition on just hay that it would take most of the following summer to regain the lost ground.  For this reason, we decided to butcher him in November at 24 months rather than waiting till he reached 30 months in May 2013. 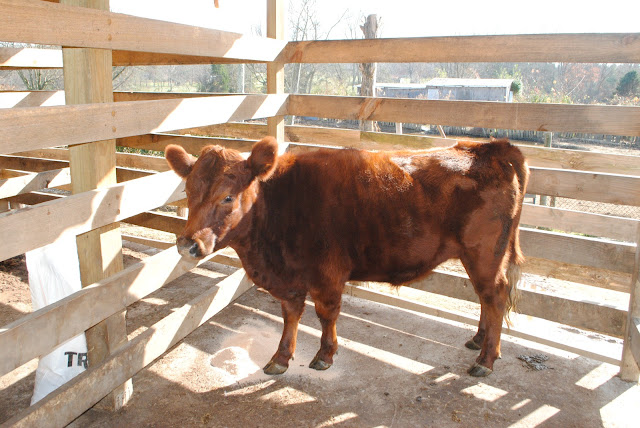 We took T-bone to Jeff for butchering on Nov. 20, 2012.  Jeff doesn't have a scale, so we weren't able to get a hoof-weight for T-bone, and his assistant Cory didn't get us a hanging weight, so unfortunately we can't calculate a rate of yield this time.  We'll know better next time!  What we did get was a total of 277.17 lbs. of beef.  Here's the final break-down for our first Dexter beef:

That's a net price of $2.58 per pound.  We're thrilled with the dark red, tender, delicious beef we got.  Cory told us that these are some of the nicest steaks he's ever seen, and we can testify to them being some of the best-tasting we've ever had!
Posted by Susan at 7:42 PM