Advisory:  Numerous fruit flies were murdered during this experiment.  If you want a non-lethal fruit fly trap so that you can go release your cute little fruit flies outside, you're going to have to go online and find a different trap!
To paraphrase an Ogden Nash poem:

"The Lord in His wisdom made the fruit fly
And then forgot to tell us why."


About 2 weeks ago, fruit flies were driving me crazy!  They were hanging in clouds around my kitchen sink and were even in the bathroom.  I went online and learned that they actually multiply in drains because they love the damp dark nastiness down there.  Ick!

You handle that by pouring some bleach down every drain at night.  Being on a septic system, I'd rather not do that.  I don't want to kill all the good bacteria that live in the damp dark nastiness even farther down there!  More ick!  So I needed a different way to control the fruit flies, and I didn't want to make a trip anywhere to buy a fruit fly trap.

Still online, I found numerous suggestions for home-made fruit fly traps.  I decided to perform an experiment, trying several different ones at the same time.  After all, I had plenty of fruit flies to experiment on!

Trap Number One:
Take a glass or jar and add a 1/2 inch of cider vinegar in the bottom.
Add a drop or two of dishwashing liquid to the cider and swirl.  This acts as a surfactant to break the surface tension of the vinegar so flies that land on it will fall in and drown.
Form a sheet of paper into a cone and tape in place.  A smaller opening at the bottom is recommended, but mine worked fine.
Place the cone securely in the glass so fruit flies cannot escape up the sides of the glass.
Set on the counter.


Take a glass or jar and add 1/2 inch of cider vinegar in the bottom.
Add a drop of dishwashing liquid (see explanation above).
Cover the jar with plastic wrap and secure with rubber band.
Poke small holes in plastic wrap with a knife.
Set on the counter.


Trap Number Three
Put 1/2 inch wine in bottom of small glass
Add a drop of dishwashing liquid (see explanation above)
Cover glass tightly with plastic wrap.
With a knife, poke a small hole in the plastic wrap.
Insert a piece of drinking straw about 2 inches long, leaving about 1/4 inch of straw poking up from the plastic wrap.  Fruit flies can get in through the straw, but can't find their way out and they drown in the wine.  What a way to go!
Set on counter.


Two minutes after I set up Trap Number One, it had already attracted quite a few fruit flies onto the paper.

Two minutes later, at least one fruit fly was caught inside Trap Number One. 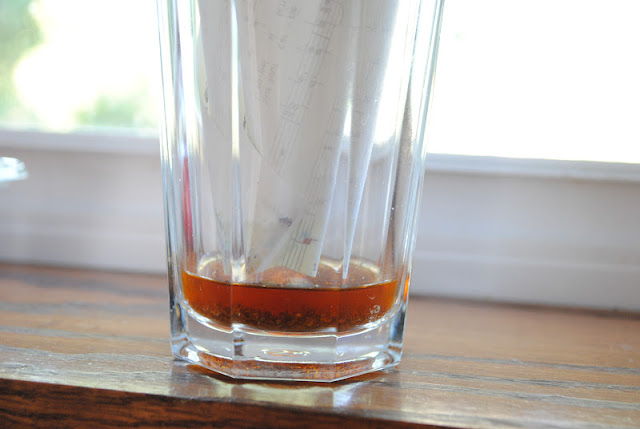 Within two days, hordes of fruit flies had drowned in Trap Number One.  This photo was taken four days after Zero Hour, and the vinegar had partially evaporated.  I threw it away at that point.  The job was done (temporarily, I'm sure) as the fruit flies met their fate.  The fruit fly frenzy had fizzled out! 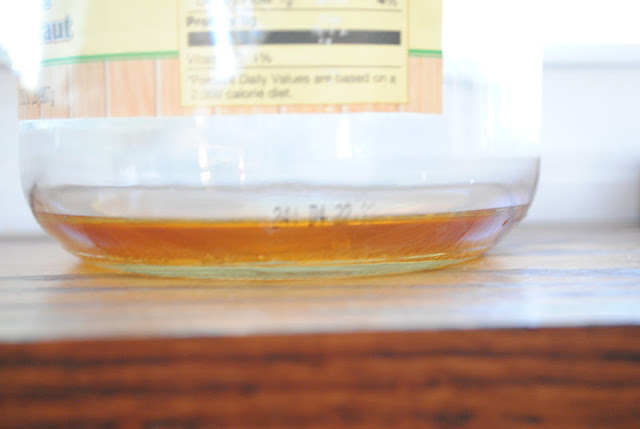 Trap Number Two was much slower to work.  After I found the straw trick online, I added a straw in one of the holes.  The trap then began to catch some flies.  I think the plastic was too far above the vinegar for the flies to be attracted by the vinegar.


Trap Number Three caught nary a fly as far as I could see.  We've caught more fruit flies in a bottle of wine left uncorked for a few minutes than we did in our trap.  I know that, because they've been poured into my glass on more than one occasion! That's where having lived in Africa comes in handy--I just fish the fly out of my wine and enjoy the wine! 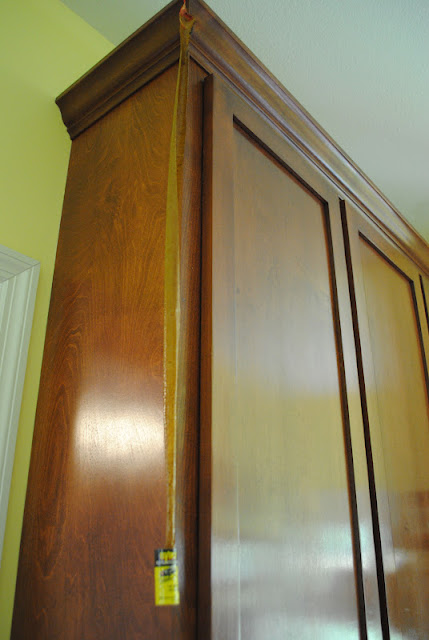 And if you're plagued with the fruit flies' larger cousins, house flies, I find a simple fly paper a very effective way to catch them.  Not very aesthetic, but effective.

I must confess that while watching "Hoarders" this past winter, I did pause the TV at the point where the film crew zoomed in on an ancient fly paper hanging from the ceiling. I had to hurry into the mudroom and yank my old one down!
Posted by Susan at 2:13 PM