NOTE:   This is not one of those posts where we look amazingly competent.  This is one of those "live and learn" posts.  The hero of this post is our neighbor, Mike! 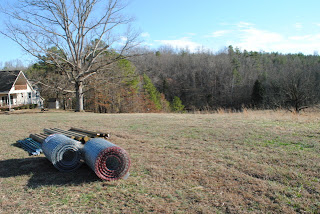 I have referred several times to the hill behind our house that we plan to fence in and connect to the barnyard.  Well, today was D-Day.  D for Doing, but also D for Don't Do It This Way!  First, let's take a panoramic view of the project beginning with some of the fencing materials that Herb brought home yesterday. Looking to the right we see some more of the Barn Pasture.  (I used to call it the Hill Pasture, but since the Back Pasture, in the distance, has the biggest hill on the property, that seemed a misnomer.) 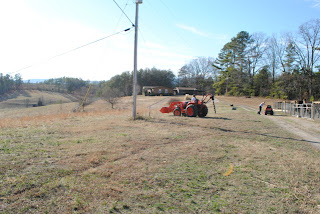 And looking all the way to the right we see the extent of the Barn Pasture where it, fittingly, adjoins the barnyard. 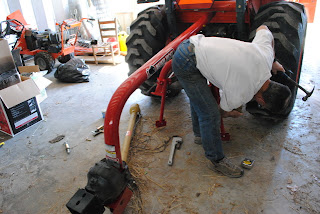 First item of business was to put the post-hole digger on the tractor.  That was the easy part--writing that, I mean!  This picture was taken at 2:47 after Herb came in the house to call Boykin Tractor to find out why it was SO HARD to get the post-hole digger on the tractor.  He learned that it is always hard, so he probably wasn't doing anything wrong. 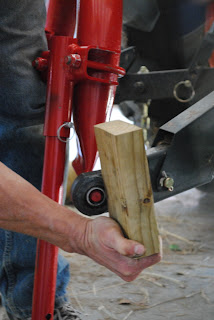 Here is a close-up of the problem.  That red circle (part of the post-hole digger) wouldn't go into the hole in the black arm of the tractor, and this happened on both sides.  It's supposed to go all the way through the hole and stick out so a cotter pin can go through it and hold it in place.  So Herb took a hammer and banged on the block of wood, trying to make the red piece go in.  All that happened, finally, was that both red pieces were thoroughly stuck partway into their respective holes.  They wouldn't go in and they wouldn't come out.  That was where I came into the story, and for the next hour Kara and I tried to help.  Herb finally got one red part out, but the other one was stuck, stuck stuck!  That was when I suggested calling Mike, our neighbor, who is a retired mechanic. 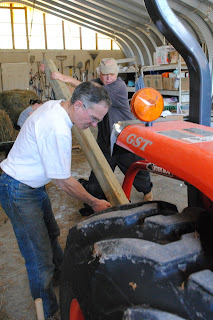 This picture was taken at 3:47, after Mike came willingly and cheerfully to our rescue.  The first thing we learned is:  If something won't go into a hole, NEVER hammer it in!  Because you may get it in, but you'll never get it out again!  For about the next hour, Mike and Herb tried all the tricks in Mike's bag--levers, wedges, sledgehammers--to no avail.  Mike thought the paint on the red part was sticking, so Herb sanded it off on the other side where he had gotten the two pieces separated.  I gave a squirt of WD-40--and the two pieces slid smoothly together!  Now all we had to do was figure out how to remove the paint from this side--while it was stuck inside the arm of the tractor! 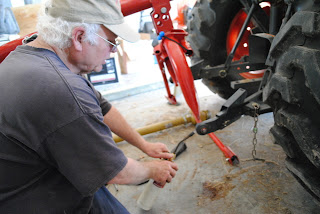 That was when Mike went home to get his propane torch to try to heat up the black piece, hopefully making it swell enough to bang the red piece out. 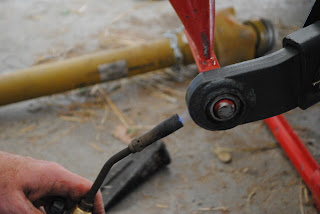 Finally, Mike heated the red piece, softening the offending paint, and with a few more bangs from the sledgehammer, the red piece came free.  Then Herb sanded off the paint, I squirted on more WD-40, and that side went together perfectly!  So we learned a second thing:  Sand the paint off first! 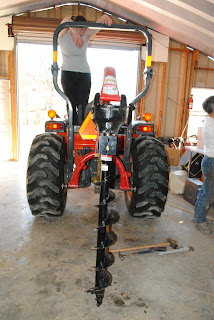 Mike was very sweet and encouraging, telling us that we've learned a lot about tractors for someone who didn't know anything about them a couple of years ago.  Actually, I think he was right.  And the most important thing we've learned is:  When you can't figure it out, ask for HELP!

So finally, at 5:15, the post-hole digger was in place ready to go.  That is one impressive piece of equipment.  Mike, having saved the day, headed home with some parting warnings about how dangerous post-hole diggers are.  We already know!  When Buddy Boykin sold us this one, he also told us it's the single most dangerous piece of equipment on the farm--and then he told us a story of a man who was killed by one when he tried to stand on it to give it more digging weight.  Lesson number four was already learned:  NEVER let anyone near the post-hole digger while it's in operation! 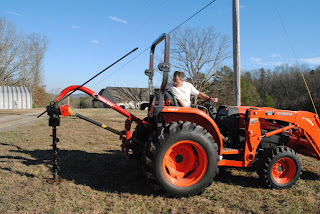 So about 5:40, three hours after I came into this story, Herb aimed the post-hole digger where he wanted his first gate-post and drilled it into the ground. 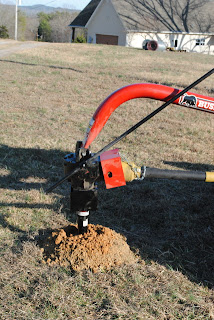 To our amazement, this wonderful piece of equipment cut into our hard-clay earth like a butter knife into butter.  Herb followed lesson five that we learned from Mike:  Go down a foot, draw the digger back, go down another foot, draw back, etc.  That way you avoid dangerous entanglements with roots deep underground. 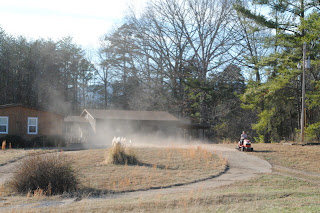 Having offered her support and help, once the post-hole digger was on, Kara moved on to another Kubota activity--mowing her lawn with our Kubota riding mower. 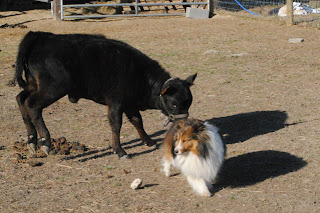 Zephyr's idea of offering support was to "fetch" the rocks we put in place to mark where the gateposts should go.  After she moved one rock and Herb had to re-measure, I put Zephyr in the barnyard where she would stay out of mischief.  That was when Siobhan decided that chasing Zephyr seemed like fun!  Oh well, at least it kept them both out of our hair! 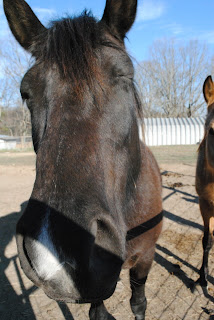 Angel was curious about the proceedings, but she seemed to find them snooze-worthy. 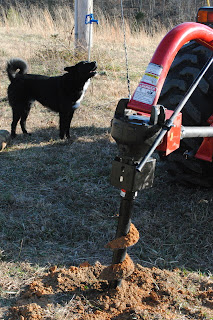 Hero, on the other hand, thought the PTO-operated post-hole digger was some sort of threat.  Maybe he'd been listening to all the warnings about how dangerous it is.  At any rate, he barked and barked at it. 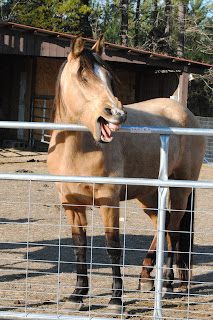 Brandy seemed to think watching Herb dig a post-hole was almost as much fun as destroying the tack room! 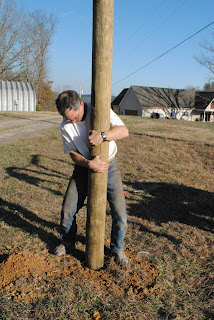 With all this help, it only took Herb 45 minutes from start to finish.  He had to do a bit of hand work to get loose dirt out of the hole, and then he was ready to drop in the 8" gate post. 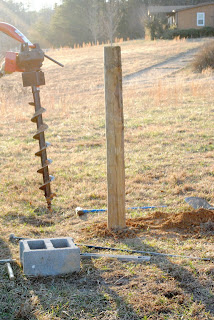 Four hours later--but only 45 minutes of actual post-hole digging--our first gatepost was set and tamped down.  And that's the story of how Mike Makes Right!
Posted by Susan at 10:14 PM