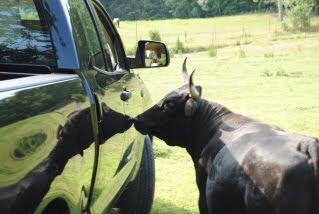 Opposites attract, or so the old adage goes.  In the movie "Fatal Attraction," a man's extra-marital attraction and affair lead to tragic consequences. 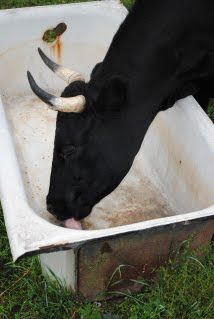 On a farm, cattle might seem to have an attraction for eating things that can actually be fatal to them.  Along with their grass and hay, they have been known to swallow barbed wire, baling wire, nails, screws and various  bits of plastic.  These things can cause serious harm and result in a condition known as "hardware disease."

(See the previous post Tum! Tum! Tum! Tum! How Many Stomachs Does a Cow Have? for an explanation of how cows eat and how their digestive system works.) 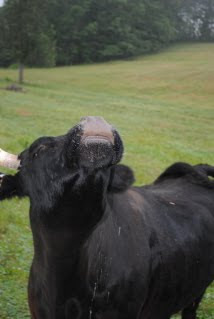 Here is an excerpt from an article entitled "Hardware Disease," by Sam Barringer, D.V.M., of West Virginia University Extension Service.
"My mother always told me to stop eating like a pig. In fact, my eating pattern most closely resembled that of a cow. Cattle take large mouthfuls of food and often swallow without any chewing. This indiscriminate eating pattern predisposes cattle to a disorder commonly called hardware disease. If you have cattle eventually one of them will experience this disease.

Hardware disease is caused when a bovine ingests a relatively heavy and sharp object. The object falls to the floor of the rumen and is pushed forward into the reticulum. The reticulum is one of the compartments in the bovine stomach, and its function is not well understood. However, the contractions of the reticulum force the object into the peritoneal cavity where it initiates inflammation."


Dr. Barringer goes on to enumerate some of the signs of hardware disease, although he writes that it is often impossible to be 100% sure of a diagnosis.

Hardware disease is very serious and can lead to death or euthanizing the animal, sometimes despite the best treatment.  Treatment involves giving a broad spectrum antibiotic, limiting the movement of the cow, and possibly surgical removal of the object.  One final element of the treatment is also one of the best preventive methods that can be used:  Feeding the cow a magnet!
After having heard several horror stories from other cattle owners who lost animals to hardware disease, I made an appointment for our vet to come give magnets to our three girls. 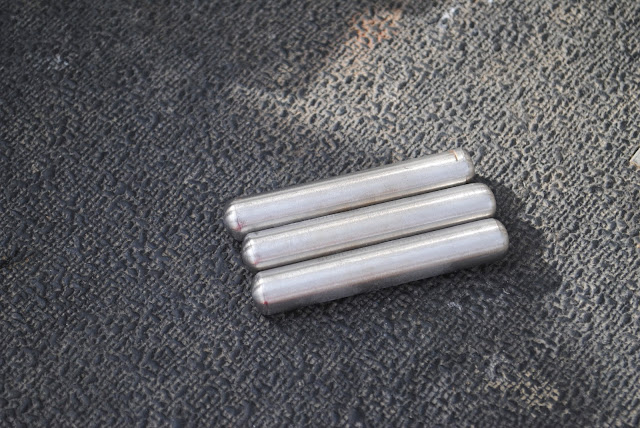 Here are the three magnets. 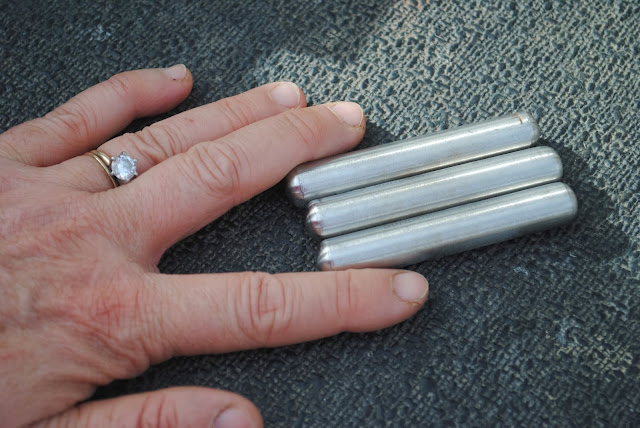 They are about the size of my pinky. 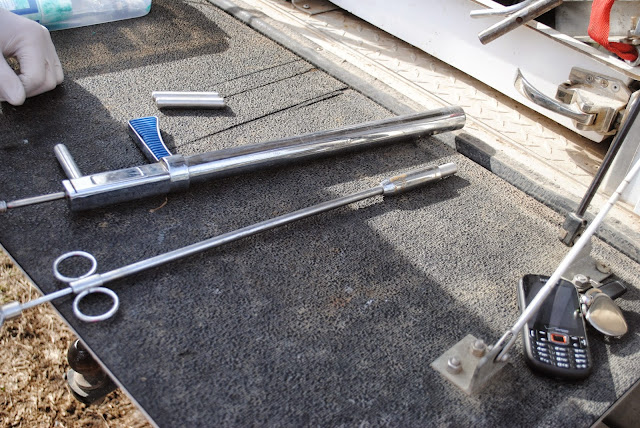 We're the only Dexter clients of our vet, Dr. Weldon, and his only non-beef clients.  All the local cattle operations raise beef cattle with minimal handling of the animals, compared with the intensive handling in dairy operations where the use of magnets is quite common.  Dr. Weldon said that normally he would use either a vaginal speculum or a bolus gun (above left) to administer the magnets, but since he had a balling gun (above right) in his truck, he preferred to use it on our little girls. 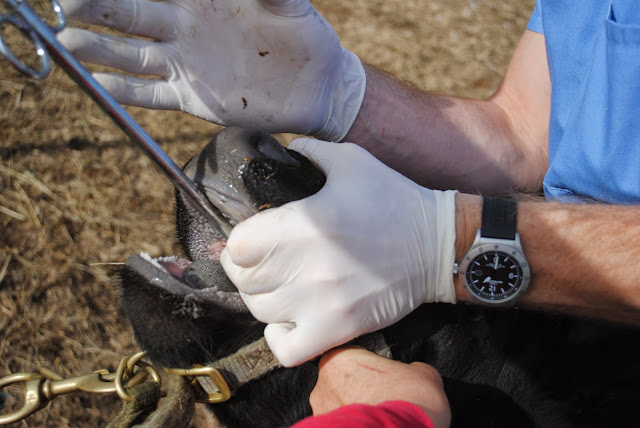 Here is 6-month old Macree getting her magnet.  You can see how much she loved it!  How do you say "It's for your own good?" in cow? 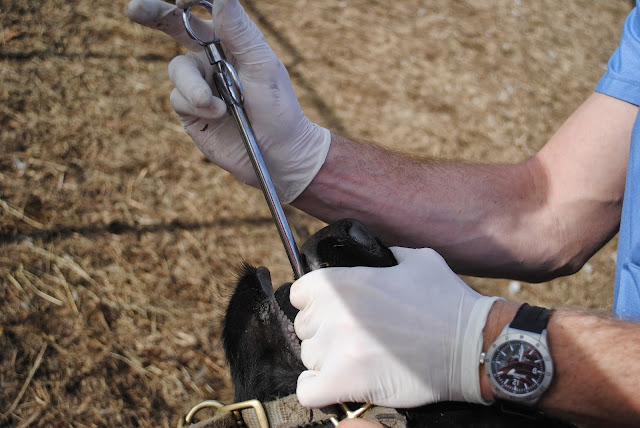 Dr. Weldon gave me a tip when using a balling gun (although I have no intentions of trying this operation myself!)  He said to never insert your thumb and fingers into the holes of the balling gun even though it looks like it's designed to work that way.  He warned that you can get a finger badly injured if a cow twists her head with your fingers trapped in the rings.  Insert the balling gun with your whole hand, and once it's in place, slap it in with the palm of your hand. 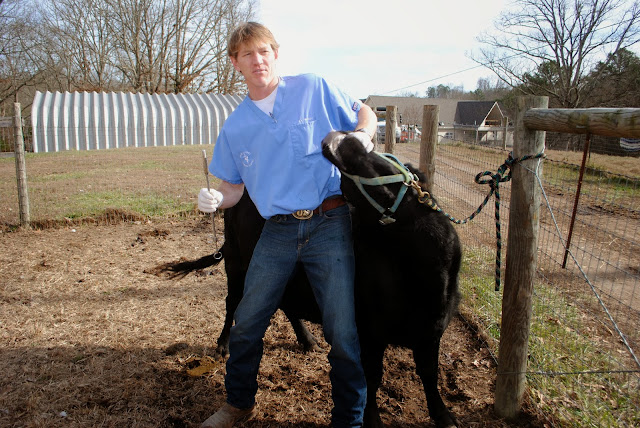 It sounds easy, right?  Well, take a look at these photos of Siobhan getting her magnet!  (It was Dr. Weldon's choice to do it by himself.  Please don't think I abandoned him just to get these photos!) 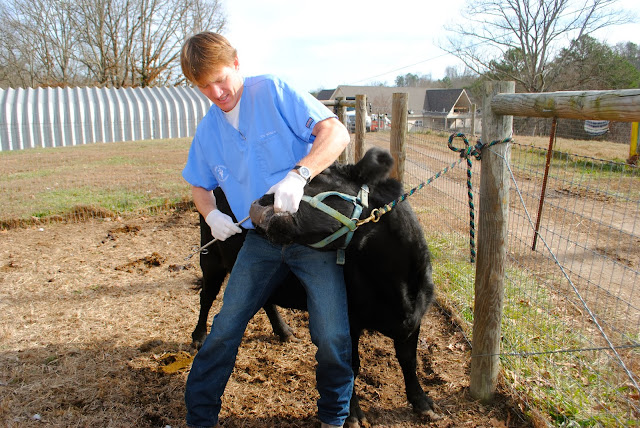 Oops, not up the nostril! 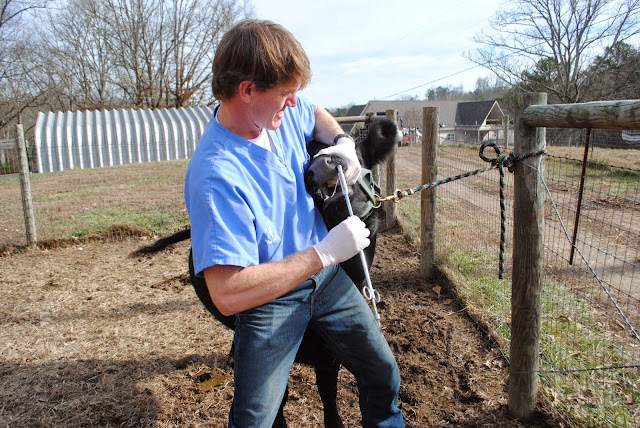 Not that nostril, either! 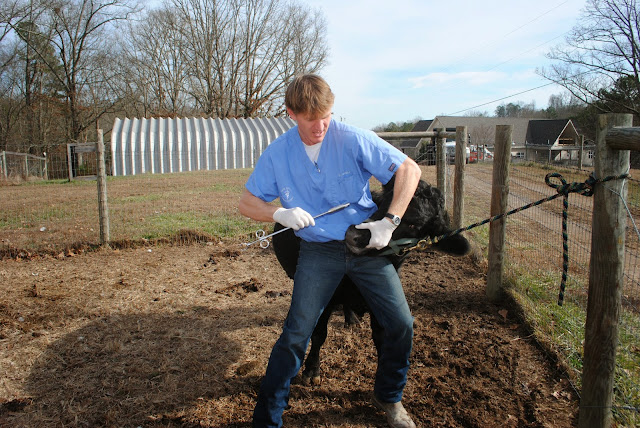 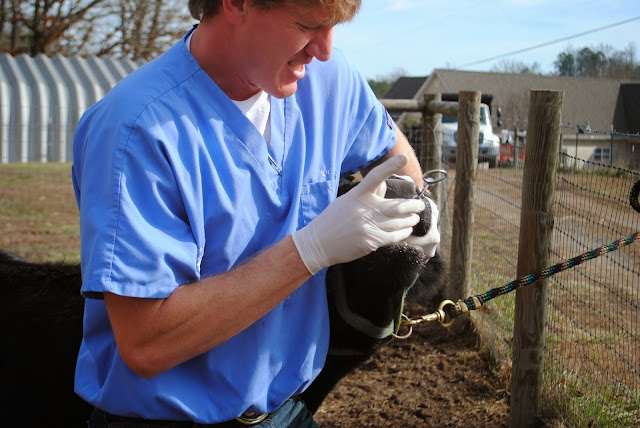 I'm glad to say that at least sweet Ebony lived up to the Dexter reputation of being easy to handle and hopefully redeemed the breed a bit in Dr. Weldon's eyes, even if she didn't give me any interesting photo ops!

In closing, let me say that giving magnets preventively is merely a precaution.  The BEST preventive measure is to keep the farm clean!  The hay we buy is baled with twine, not baling wire.  As we prepare to put new fence in, we carefully cut and remove all the old barbed wire along with any other trash we find.  As we walk around, we routinely pick up shotgun shells, pieces of glass and bits of wire that we find left from previous owners of our land.

I would like to thank the Dexter breeders who have shared their tragic experiences with hardware disease on public forums as a help to other breeders who, like themselves, had never heard of it.  They first learned about it when it struck their beloved cows, but they want to make sure the rest of us don't suffer a similar loss.  Thank you all, and your point is well taken:  An ounce of prevention is worth a pound of cure!