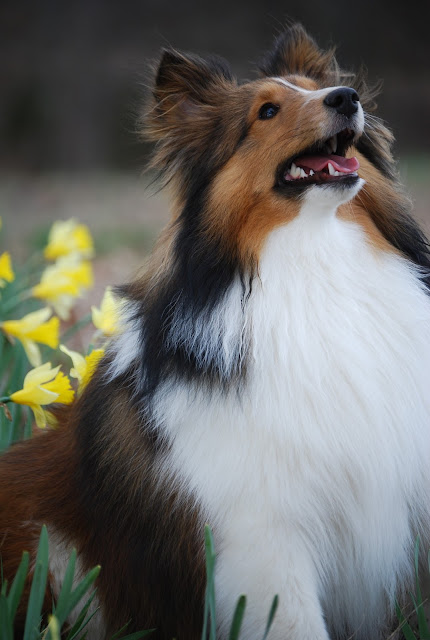 It is with an aching heart and burning tears that I write this post.  It will be long and full of photos because it is a tribute to my wonderful, amazing Sheltie who was such a central part of our lives on Zephyr Hill Farm that we still can't believe she is gone. 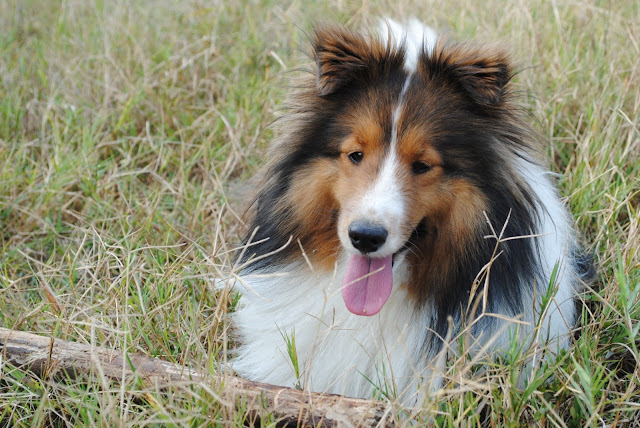 Herb and I were gone on a five-day trip and came home to be greeted by Hero and Misty, but no Zephyr.  We called and called and searched everywhere, sure she had just gotten left behind in a pasture or the barnyard, but there was no sign of her.  After 45 minutes of searching for her, a thunderstorm finally sent us inside when it became clear that she wasn't anywhere we could find her.  A short while later Kara started over to her house and found Zephyr laying in the driveway, almost to the house.  Kara picked her up and raced to the house, and we rushed her to RIVER, the emergency clinic in Chattanooga.  We now know that Zephyr had gone away to die, as dogs often do, but when she heard us calling, she tried to drag herself to the house despite having one hind leg so stiffened out that it must have been sheer love and willpower that enabled her to walk or crawl. 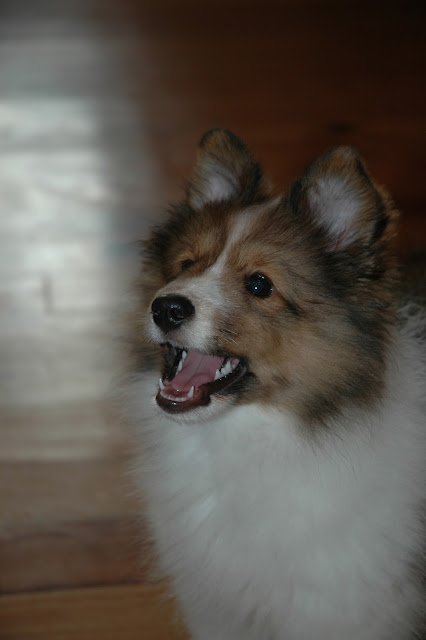 I handed Zephyr over to the waiting team, and they went right to work.  Her heart stopped and she wasn't breathing.  While they did CPR, the doctor let me go in to her.  All I could do was pet her head and beg her to come back to me.  Her heart began beating and she breathed on her own, and the wonderful team continued to work on her.  She was suffering from heat stroke and diarrhea, although we will never know what caused the diarrhea in the first place.  Kara joined me, and we stayed with Zephyr for the next three hours until she was stabilized.  Before we left for home, the doctor told me she gave Zephyr only a 50% chance of recovery.  She also said that she felt sure that it was because I was there talking to her that Zephyr was still here. 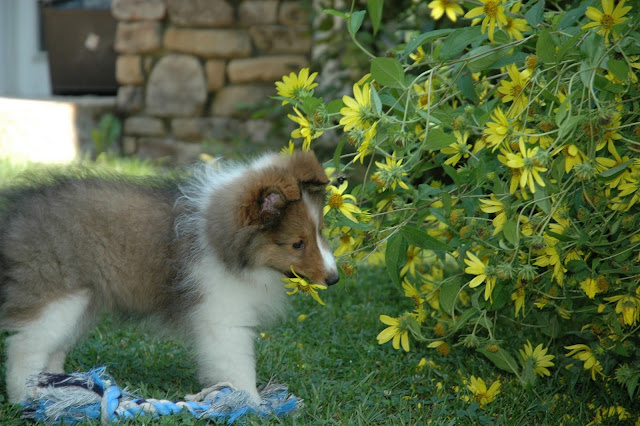 The staff at RIVER welcomed me to visit Zephyr as much as I wanted, so I joined her the next morning.  Before long, she began to have seizures, a bad sign.  When even a constant drip of Valium could not hold off the seizures, I buried my head on Zephyr's side between the IV's, oxygen cannula stitched in one nostril, nasogastric tube stitched in the other nostril, blood pressure cuff on one leg, and EKG leads on the other three legs.  I hugged her and begged her to stay with me, and after a few seconds, the seizures stopped.  When I raised my head and released her, they started again.  This scenario was repeated several times, and I knew that Zephyr was aware that I was with her and that somehow I was helping her in a tiny way.  Herb was there at the time, and he was as amazed as I was at her response to my hugs. 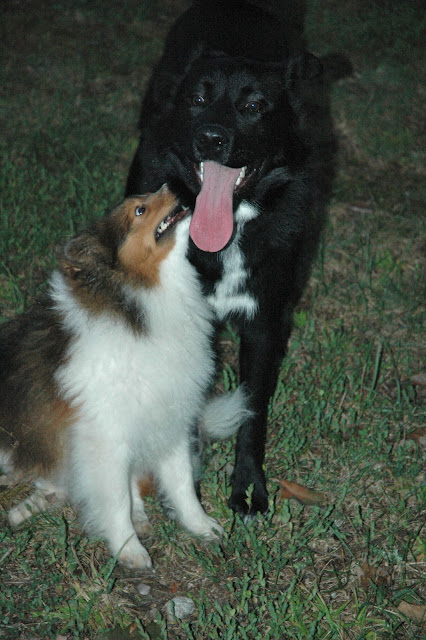 Eventually even love couldn't hold off the seizures, and the doctor started a drip of propofol, the anesthetic notoriously used by Michael Jackson.  The seizures stopped, and we continued to monitor Zephyr's breathing to be sure that her respirations stayed adequate.  By this time the doctor only gave her a 10% chance of recovering, but we all hoped that the seizures could be held off and her brain might begin to recover from all the damage that had happened to her little body. 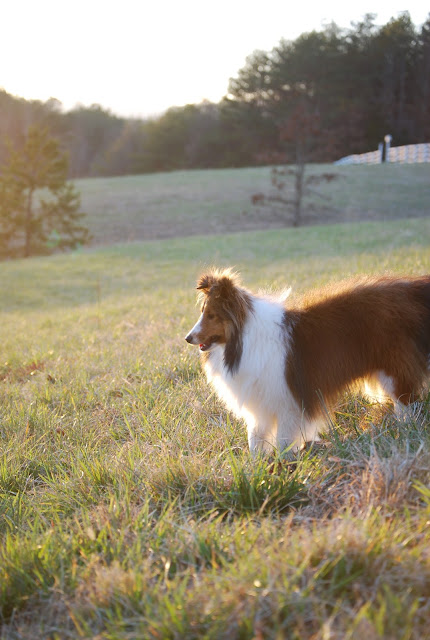 During the afternoon, I received the bad news that Zephyr's carbon dioxide level was rising, meaning she wasn't breathing it off, and yet her brain was not responding by telling her to breathe more deeply.  The doctor said we had to diminish and stop the propofol and that the seizures were likely to return.  Zephyr would need to breathe better on her own or she would have to be intubated.  I had to decide whether or not to do that if the need arose, but he wanted me to be aware of the complications associated with her being on a respirator. 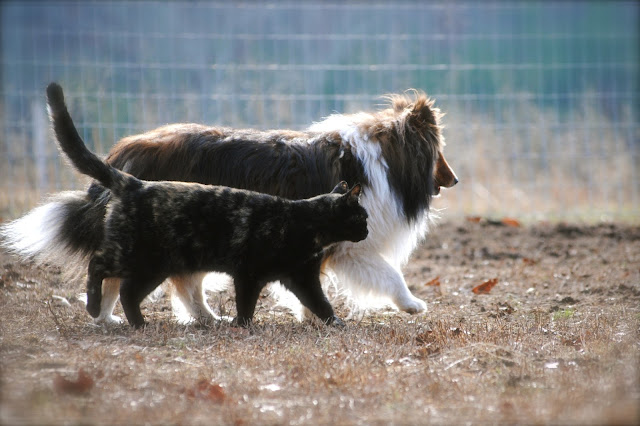 At that point I knew that the fight for Zephyr's life was over.  We had done everything humanly possible to help her, and many, many people had been praying for God to intervene on her behalf.  He chose to answer differently than we hoped and prayed.  I continued to stroke Zephyr and talk to her, telling her that when she got over the bridge she should look for Alizée and Cider and Ditey, and especially Precious and Peekaboo and Tiger.  I told her to have a good reunion with Precious and Peekaboo and to tell them I love them.  I told her over and over what a wonderful dog she is and how much I love her . . . and then she didn't take the next breath. 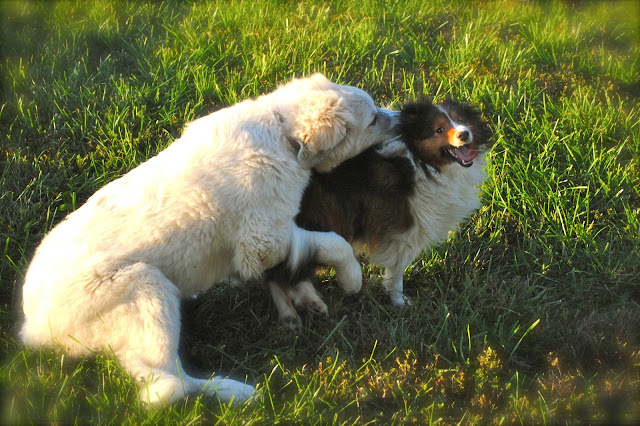 Herb and Kara were on their way and just missed telling Zephyr goodbye.  We brought her home, and Herb dug a grave near the top of the hill looking out over the farm, the spot where Zephyr has so often sat beside me while I took pictures of beautiful sunsets, the spot where I took a whole series of photos of her romping with Misty.  I can see her grave from the kitchen window and from my desk.  I still can't believe she's there and not sleeping on the rug behind me, snorting her funny little snore.  I keep looking up at the front door expecting to see her waiting there politely to be noticed and let in. 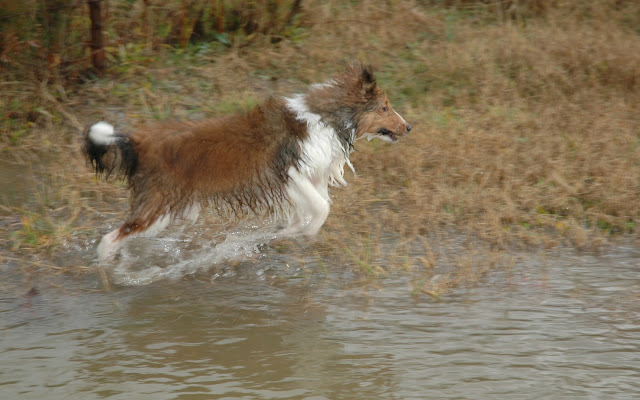 Zephyr leaped into our lives with the special joy that was always hers.  She loved to play with water.  She was Hero and Misty's chew toy, wrestling happily with them even though she could never win.   She loved to play with Charis and Kol and could always be found under their seats at the table.   When Eden visited here for the first time, Zephyr stayed as close to her as she could get.  She loved chasing her ball or bone or a stick--anything that anyone would throw for her as long as they would keep doing it.  She was the only one of our dogs who never chased the cats, even in fun, and they rewarded her by hanging out with her. 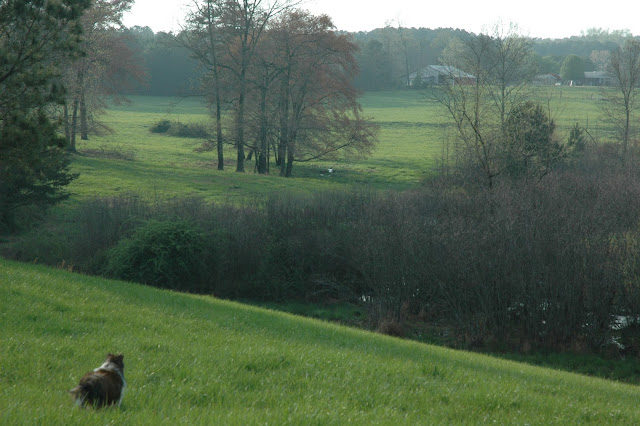 Zephyr didn't like to ride in the car, but she did love to go to Leahaven.  There, as here, she was the Queen of her domain. 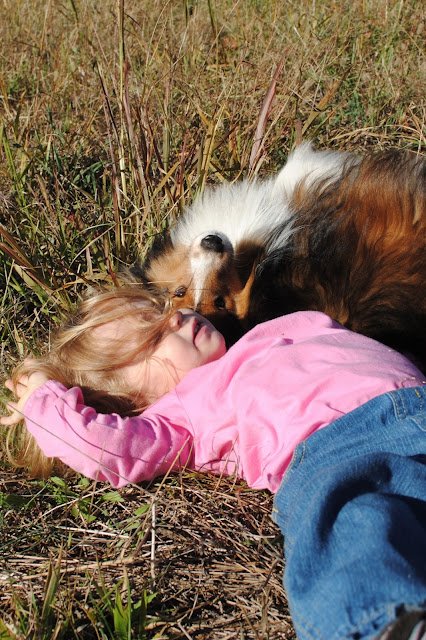 Our son Jim (who is not a fan of dogs) said that Zephyr was the perfect dog for kids.  She was!  She was always gentle, with newly-hatched chicks and with the grandkids.  I never had to worry whether she might nip or growl.  Once before I could get there, one of the kids accidentally yanked out a clump of her hair --and Zephyr laid there without even moving away, without even a wince.  She adored the children! 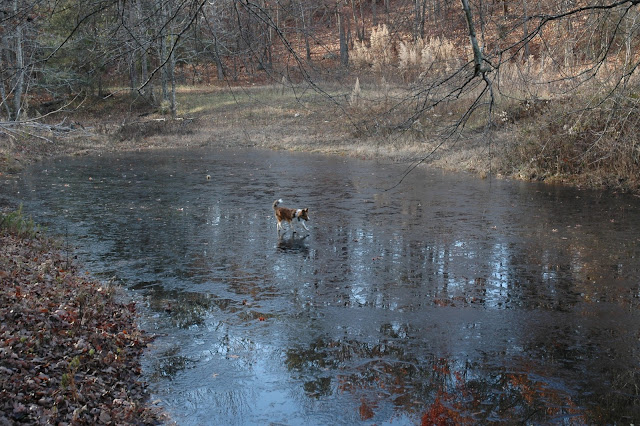 I told Jim in response to his comment that Zephyr was the perfect dog for children:  "Yes, she was!  She was the perfect dog!"  Of course, she had her little quirks--like hating the vacuum so much she had to be put outside when I vacuumed.  We called the list of noisy things Zephyr barked at "Zephyr's Rules,"and we laughed about them (most of the time).  We marveled when she learned the word "chill," which could even make her stop barking at the vacuum!  I used to tell people that Zephyr "walked on water."  It was a joke based on one cold winter when she walked on the frozen pond, but it was really quite apt.  Zephyr was a dog in a million. 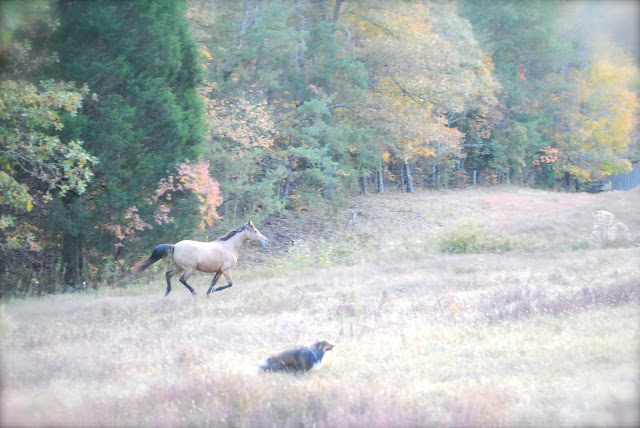 I'm very grateful to all those who prayed for Zephyr during her brief illness, and for the many who have written and called to offer their sympathy.  Please don't be shocked if I break down in tears; it's going to take a long time before I'm all cried out, but your love and hugs really do help.  I know that dogs don't live near long enough, but I thought I'd have many more years with my Zephie.  I don't know why, but in God's plan she raced into my life and out again too soon, and she's taken a huge chunk of my heart with her. 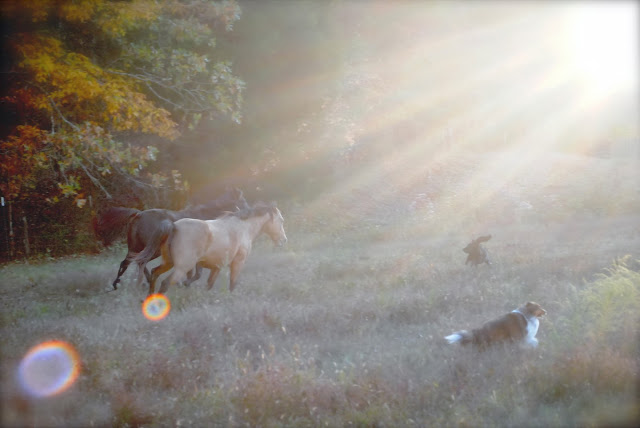 We talk about the Rainbow Bridge.  I don't really know where our beloved pets go when they die, but I  do know that God is good and that heaven, as Herb puts it, will not be the absence of everything good on earth. And so I hope that some day I'll see Zephie come running to meet me and that I can hug her again and stroke her silky fur and smooth my hand over her face and eyes the way she loved.  And then I'll throw her favorite ball for her for about a thousand years.  Until then, I told her before she left, you find Precious and Peekaboo and Tiger, and look up Alizée and Cider and Ditey, even though you didn't know them, and they will all keep you company until I come. 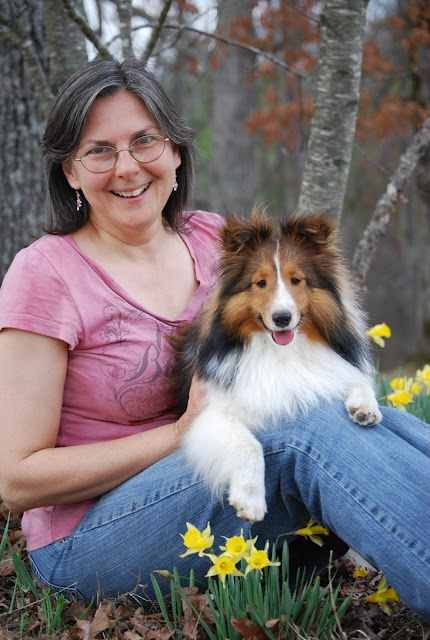 Goodbye, my darling Zephyr.  I love you.
Posted by Susan at 7:59 PM

Email ThisBlogThis!Share to TwitterShare to FacebookShare to Pinterest
Labels: Zephyr