When we put up our head gate in July as part of our plan to breed Sara again, a reader asked how it worked.  I posted about an attempt to breed Sara in August, an attempt which failed--not through any fault of the head gate, but because of things we didn't know.

Since then, Herb has made the pen around the head gate smaller so Sara has less room to get away.  He also fastened a 16' cattle panel to the end of the chute as a sweep gate to move her where she's supposed to go.  Our last problem was that in August's heat we were less likely to get Sara successfully in season.  October weather has taken care of that problem without us having to do a thing!

So this morning, Mitch came from Bickett Genetics.  We enticed Sara into the round pen with pears, and I led her down the chute with a pear in front of her nose.  I must confess that as soon as Herb and Mitch had a bar in place behind Sara, I scrambled up the side of the chute and left her to the pears.  That chute is too narrow and her horns too long for me to stay in there any longer than I had to!

We asked Mitch to operate the head gate since we have absolutely NO experience, and we didn't want to miss Sara and waste his time.  He opened the gate, Sara moved forward, and . . . 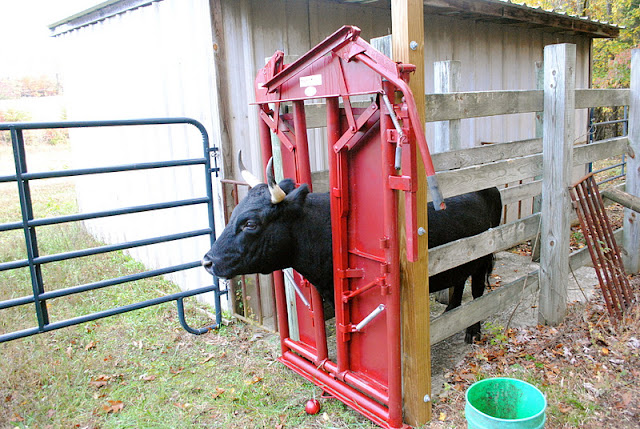 Voila!  The head gate worked like a charm (at least under Mitch's expert touch).  We were surprised that Sara seemed so calm, but Mitch explained that once she's caught, the head gate feels safe and secure to the cow. 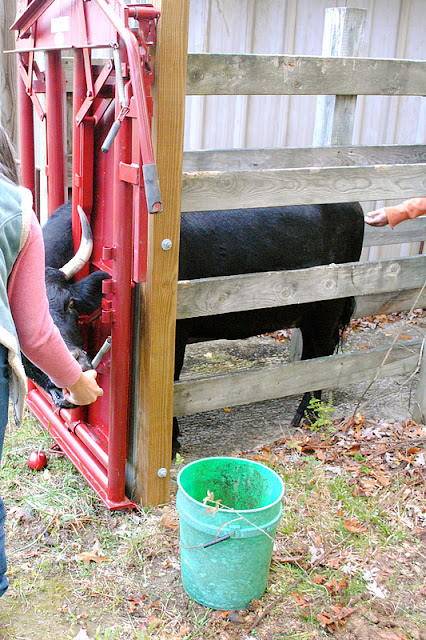 We wanted this to be a pleasant experience, so I fed Sara pears at one end while Mitch did his thing at the other end and Herb took pictures.  (I bet Mitch has never had a client take pictures of him work!  I'd love to know what he was thinking!)

Mitch put a vaginal implant in Sara and gave her an injection to stimulate her estrus (heat cycle).  He will come back in a week to repeat the injection and then 24-48 hours later to actually do the AI.

Since we need Sara to be willing to go into the head gate several more times, she got lots of pears!

She also got one thing she didn't like at all:  a halter!  We found great halters that fit Dexters perfectly at Mini Cattle Supply.

Sara was very angry at having me try to put something on her head.  She tossed her horns and repeatedly tried to catch my arm against the head gate.  Unfortunately for Sara, I was more determined than I was scared of her horns (barely!).  Also, thanks to the great halters, I was able to tighten both sides behind her ears, which enabled me to put on a slightly bigger halter than she really needs.  A bigger loop to aim around a thrashing head is definitely a good thing!  Even though she didn't deserve them after her tantrum, Sara got more pears.  We're really working on the message that the head gate is a good, pear-filled place! 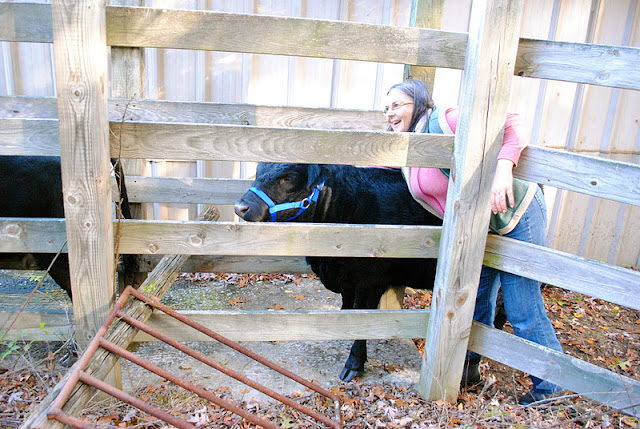 Siobhan, bless her heart, doesn't have a horn complex!  She also remembers being handled, even though she's been out in the pasture all spring and summer.  When we let her into the round pen, she willingly came up behind Sara and let me approach her.  I was able to remove her old foal halter that was half off
and put on a new one with no trouble.  She even stood still for some hugging and scratching. 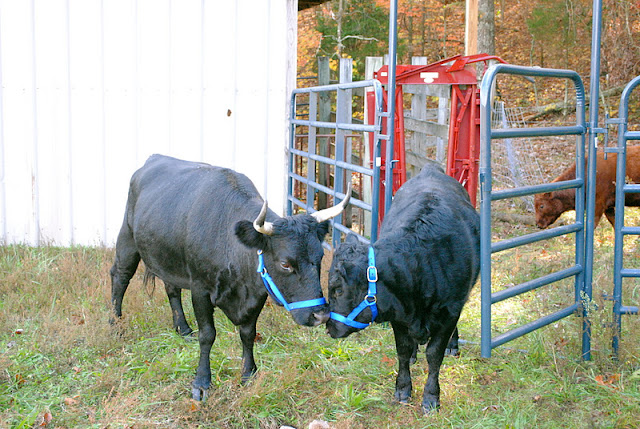 After we let Sara loose, she and Siobhan put their heads together to see what they thought of each others' halters. 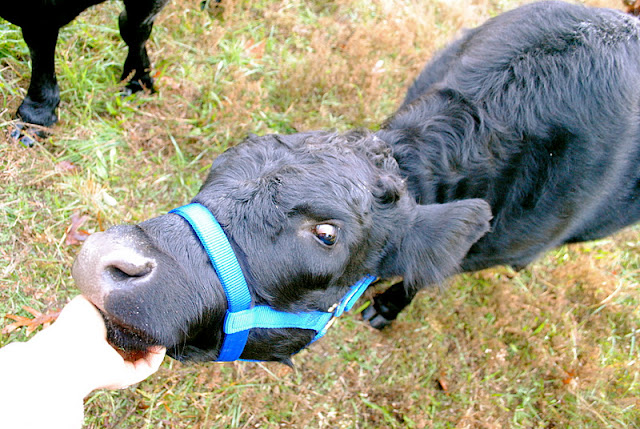 Siobhan came over to me for some chin scratching.  She rolled her eye in ecstasy while I snapped a one-handed picture. 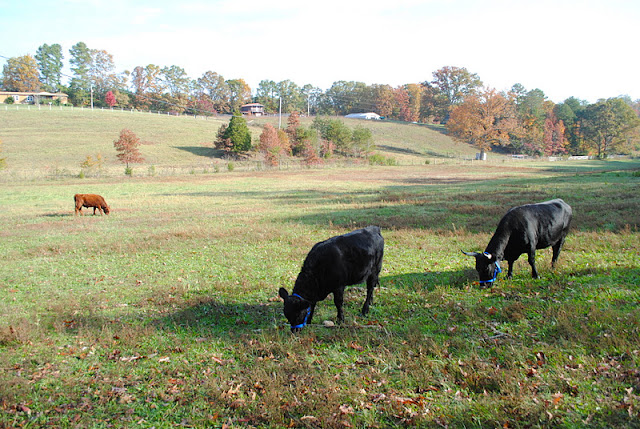 Everyone settled down for a snack.

Herb and I decided to pick up acorns for the pigs from the abundance under the big oak tree.  Finding these violets was an unexpected delight. 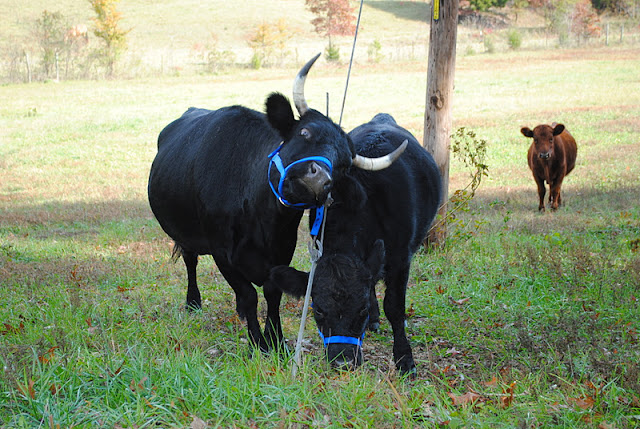 Sara and Siobhan came to see what we had in the bucket.  Sara decided the guy wire has potential as a scratching post/halter-remover.  And she reminded us that she really hates dogs when she suddenly lunged at poor little Zephyr and pinned her to the ground with a horn.  Fortunately, Zephyr's thick fur protected her. 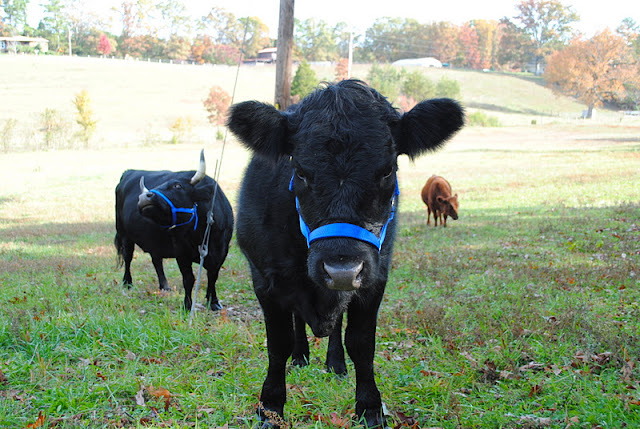 Siobhan showed her mama what nice behavior looks like by coming up for another good chin scratch. 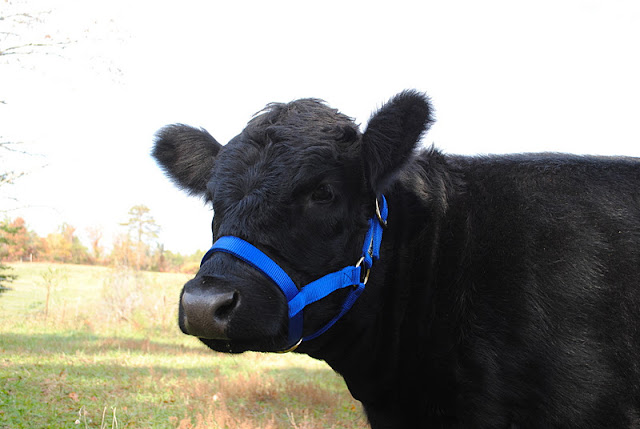 We sure do love this little heifer!
Posted by Susan at 4:30 PM