CONTEST: How Big Are These Pigs? 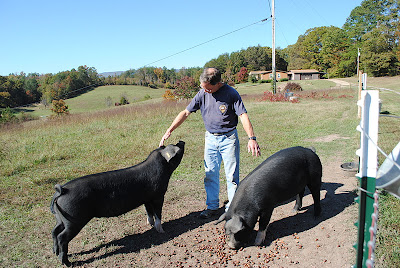 We are novices at raising pigs and haven't got a clue how big the girls are.  Why does it matter?  Because we need to make an appointment for, um, "Death Row," but we have to be sure they reach butchering weight before they go.  (The earliest available date right now is Nov. 29, so we need to pick a date soon). 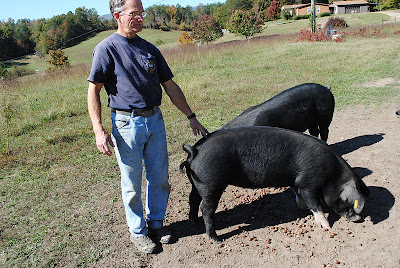 Jim, who sold us the pigs, butchers his around 220-250 lbs.  He told me today that his biggest pigs are 220 lbs. now and will be going soon.  I'm assuming those are males.  His smallest one is about 190 lbs. and will be going in Dec. with the rest spread out in between. 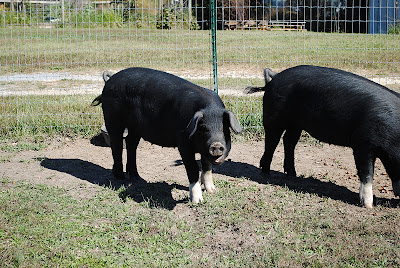 We almost certainly haven't fed our pigs as much as Jim did because he makes his own custom feed and controls what goes into it.  His pigs get pasture plus as much feed as they want.

When we realized that the only commercial pig feed we could get contained pork products--WHAT???--we decided two things:

1)  We preferred to do mostly pastured pork, using feed as a supplement to make sure the pigs grew optimally.  (Two of our "pig muses" are Nature's Harmony Farm and Sugar Mountain Farm.)

2)  The only local animal feed we could get without pork products in it was Layer Crumble, a high-protein food for laying chickens that most resembled the texture of Jim's custom feed.  The pigs didn't like it much at first until Herb realized there was no sweetener in it and started adding a half-cup of sugar to every 2 lbs. of feed.

At first, 2 lbs. every morning and night was plenty for the pigs, but when the drought hit the grass this summer, they seemed much bigger and hungrier, so we increased the feed to 4 lbs. twice a day.  Of course, they have been getting table scraps all along, mostly copious amounts of vegetable peelings along with occasional French fries or Mexican rice left over after a restaurant dinner--proudly brought home in a "Piggy Bag."  So for some time now, each pig has been getting 2 lbs of feed a day with the recent addition of acorns. 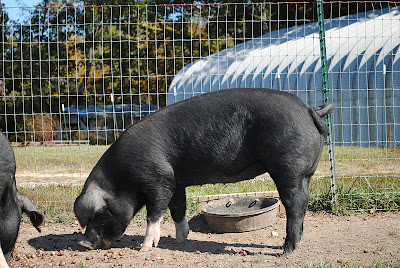 The question we have now is, how much do the pigs weigh?  And when might they be ready for butchering?

Jim offered to have me email him a picture to give us his advice, and he's going to measure the height and girth of his pigs for us to compare ours to.  (Isn't it interesting that these are such nice pigs--and the man who raised them is so nice, too?)

After I took pictures, I made some measurements.  The 8th wire up (the one just covered by the pig's back) is 29 1/2" off the ground.  Depending on how they hump or straighten their backs, they both reach this mark.

So, let's make a contest out of it!  Tell me how much you think the pigs weigh (they're quite close in size, so just make one guess).  Don't look at anyone else's guess before you make yours.  When we actually take them to be butchered and find out the exact weight, we'll see who won.  The prize?

A home-made meal of Zephyr Hill Farm pork, of course!  The winner can come collect it any time.
Posted by Susan at 5:15 PM